The Coaching Academy’s trip started out with a week in Singapore, a first trip to Singapore for the Academy but not the Penguins, as the club enjoyed Plate success in the SCC 7’s in 1997. Monfort Secondary school were first up and after discussion with the local coaches and Singapore Rugby Union Development Officers we were busy delivering a session incorporating Handling, Tackling & Defensive Shape, Phase play attack and also some options for lineout for the boys to utilise in the schools 7’s event. That proved to be the only practical session of the day as the afternoon session fell foul to a thunder and lightening storm. However, we made good use of the time with demonstrations and questions and answer session under the cover of the school eating area, mainly around the topics of Offloading from the tackle, ball presentation and the forming of the ruck.

Next morning was a session with the East Regional Under 15 side. We focused on Lineout and slow ball options for the forwards and Phase play attack and penetrating the defensive line for the backs. The players were quick to learn and there were some very skilled young players. With more dark clouds overhead the afternoon session was again in doubt, but we managed to go ahead at Centaurs RFC with a group of young boys from a mixture of countries. We played some fun games, offloading drills and decision making practices with the usual group photo with the boys in their t-shirts to finish off.

The next morning we had a classroom session with the SRU development Officers and the Academy Manager. We showed them development structures from the UK and answered questions on how Singapore could potentially adopt some of these ideas to improve their structure. The last practical session in Singapore was delivered at Unity Secondary School; the focus was Offloading, Passing, decision making at contact situation and also a variety of touch games to focus on getting support to the ball carrier. The coaching academy then spent the next couple of days watching the schools 7’s tournament and also the main SCC 7’s event and chatting about rugby with the locals.

Thank you to employees of the SRU for helping us during the week – Euan, Zaki, Hans and Issy.

Monday morning and Neil and Ben headed for the border to be met by Malaysian guides KA and Hassim. First stop was Kulai in the state of Johor Baharu. The session was made up with warm up games, passing and decision making practices and attacking structures for 10-a-side rugby. It was great to be back in Malaysia again, and the local players and children were clearly enjoying the Penguins sessions and ideas we were introducing.

Tuesday morning it was off to Kluang for another secondary school session. We split the large group into 2 and spent the next 2 hours covering ball stealing technique and defensive shape, ball presentation and clearing out at ruck time. The boys were state champions and played the game with good shape – we offered some ideas for them to adopt in the future and the coaches were very integrated in the session.

On Tuesday afternoon, after a drive over the state Border we arrived to deliver the next session at Merlimau. It was pleasing to see the local primary school teacher had brought his young fellas along and we combined them into the session where we looked at tackling technique, clearing out of rucks and offloading in the tackle. The day was capped off with a trip to the marina where we sampled lots of the wonderful local fish - fresh in off the boats.

The Wednesday morning session at Masjid Tanah, Melaka, was good fun for all where we coached a lot through games and looked at the ‘Penguin Drill’ that develops re alignment in attack along with passing skills. The last session south of KL was at Seremban, Negeri Sembilian with the King George V School. We looked at contact skills and phase play in attack to use the forwards and backs working together. The players were quick to pick up and were heading straight to a tournament to try out their new founds skills.

A club based player and coach development session finished off Thursday at the RSC club in Selangor, the Penguins team were on hand to deliver to the group of young players with a bit of help from the Academy Coaches. We then spend 1 hour talking and showing the RSC club coaches some techniques and ideas for them to try. The conversation went well into the night as the locals hosted and entertained us for dinner and drinks. The last coaching session took place at the Cobra club with a range of local schools. The players worked their way around a variety of stations being coached by the Academy and the Penguins team. The highlights seemed to be the tackling session and also the fact that there were 20 girls there as well learning new rugby skills.

Thanks you to KA and Hassim for their hospitality and as always to Charlie and the Cobra club.

Another successful trip came to an end after a total of 14 session delivered to about 500 children over the 2 weeks. 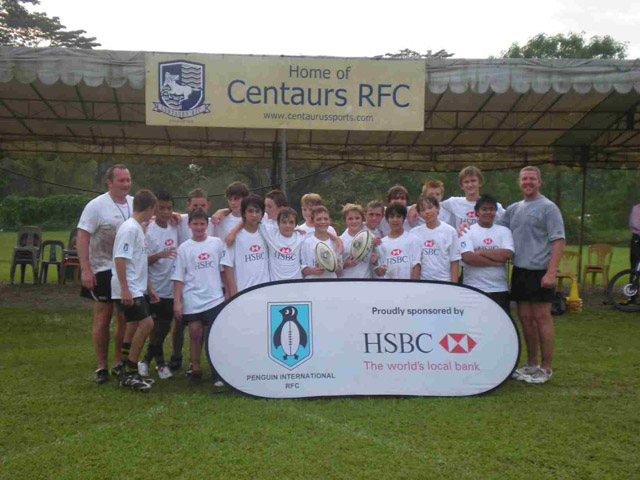 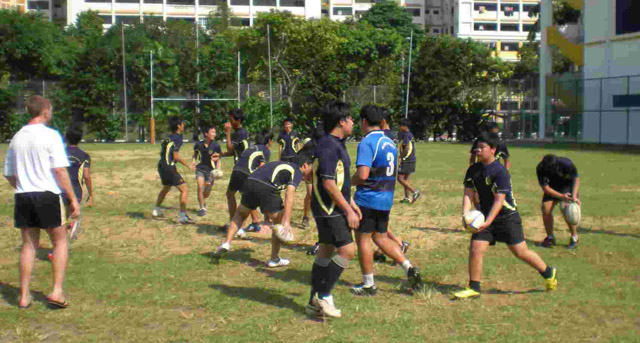 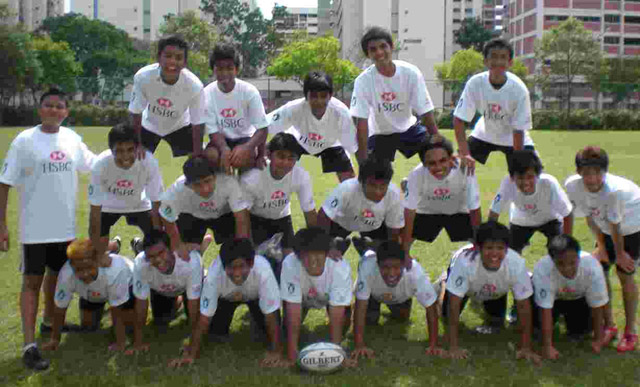 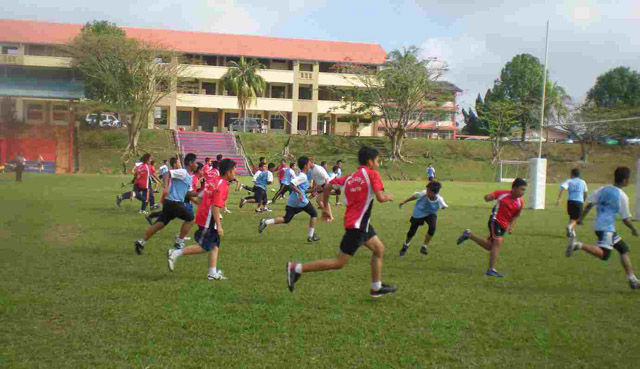 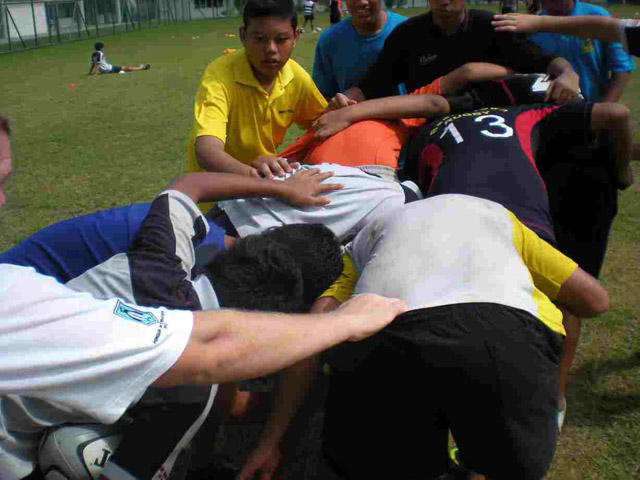 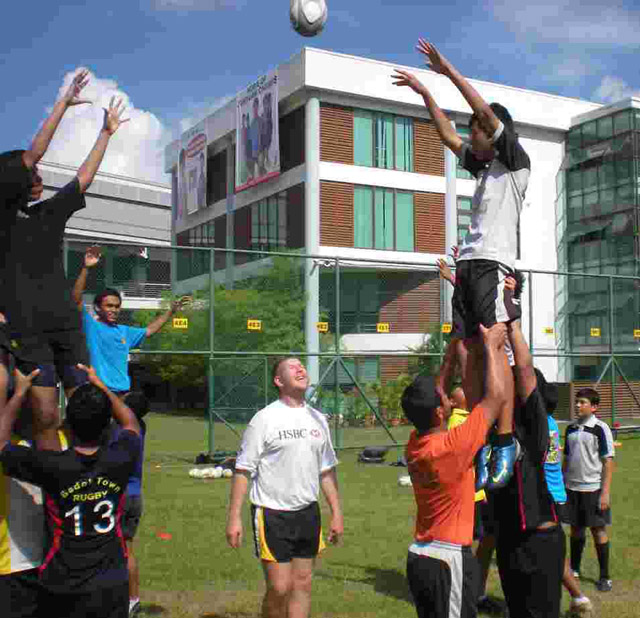 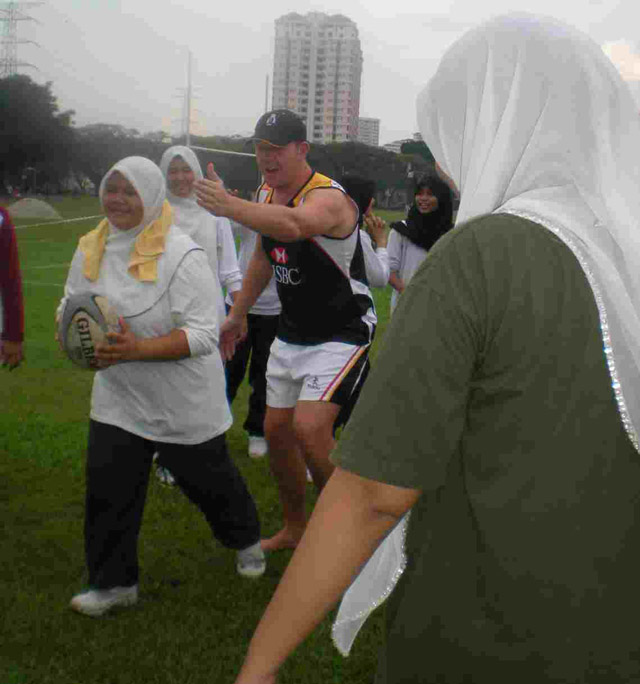 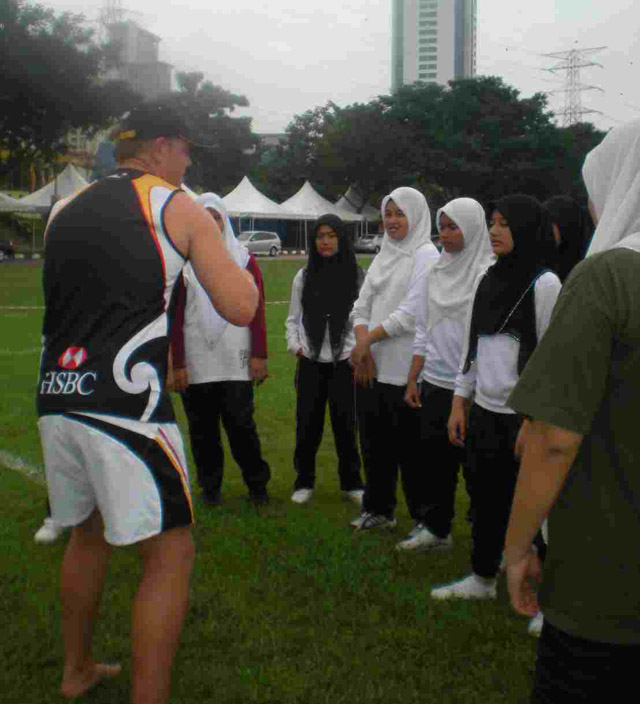