Frank Hadden provides his perspective on his three and a half month coaching stint in Asia as the Penguin Coach to support the HSBC Asia 5 Nations tournament.

The drama just kept on coming, right up to the end of this year’s HSBC Asia 5 Nations. The Division 4 tournament scheduled for Kyrgyzstan was disrupted by rioting on the streets of the capital and the final match of the last tournament, the winner takes all encounter between Cambodia and Laos brought back memories of the South Africa v All Blacks World Cup Final. The night before the game, Laos influential Stand Off Chris Mastaglio went down with food poisoning just like the All Blacks in 1995.

There was more drama in the build up to the game when the heavens opened during the Sevens tournament being played as a curtain raiser in the quaint Old Stadium in beautiful Phnom Penh. It didn’t stop the Dump Kids beating the French International School in the U13 Final. HSBC have placed a heavy emphasis on my involvement with disadvantaged kids and it is remarkable how well they have taken to the game here in Cambodia and in India as well. These children are actually youngsters who spent their lives sifting through the rubbish dumps outside the capital until the French rugby related charity known as ‘Sourire Pour les Enfants’(making kids smile), started a school for them. Their U15’s lost to the bigger French boys in the final but they were as good as any of the youngsters I had worked with throughout Asia.

My journey started at the Hong Kong 10s where I coached the Penguins, a team consisting mainly of Pro players from New Zealand and finished with the Dump kids in Cambodia. In 3 ˝ months I visited 11 countries, worked directly with 12 different National teams and indirectly with many more. I conducted around 40 training sessions working with approx 1200 young players and 700 adults. I took Coach Education sessions in Hong Kong, Singapore and Korea, did co-commentary on 2 Premier League games covered live on TV, attended 8 Press Conferences, and did umpteen TV interviews including a wide ranging discussion with an Iranian Channel which touched on almost everything except uranium. There were of course hundreds of column inches to be written for newspapers in a part of the world which does not traditionally devote much space to Rugby.

Throughout that journey through so many diverse cultures one thing remained constant – the enthusiasm and commitment of so many people in this part of the World to the game of Rugby. It takes energy to sustain and grow the game in Europe but it takes even more energy to start and then grow the sport in Asia. In most countries there are very few pitches, a chronic lack of local opposition and temperatures that make you sweat tying your boots up. I was asked on Total Rugby what my one wish would be for Asian rugby. My hope is that more clubs from both the Northern and Southern Hemisphere choose to tour in this part of the world giving the local teams the opportunity to get more match practice.

The growth of the women’s game seems even more remarkable, as they look so fragile, but you need to be tough to survive in some parts of Asia. The growth in India for example is a remarkable success story. Three years ago there was only one club for women in Pune and this year I attended a 7s tournament in Delhi where 35 teams participated. The girls from Kerala had travelled 72 hours in a non-air conditioned bus just to take part (and I thought it was tough for the boys in Orkney).

At the top end in the Premier League there is a gap between the fully professional Japanese and the rest. The intensity of a 5 week tournament is too much for the Amateur teams whose form drops off during the event as the travelling/playing/going back to work schedule gets too much for them. Meanwhile the Pro players are improving game on game with the recovery protocols, the video analysis and the quality of preparation that befits a professional outfit run by John Kirwan.

The gap between the rest of the Premier League and Division 1 is not too great and if Sri Lanka can get themselves properly organised off the field, they should hold their own following their promotion. One of the biggest surprises was the size of the game in Sri Lanka. Now that the civil war is over they could begin to harness their undoubted potential.

They will replace South Korea, once the powerhouse in this neck of the woods. Sadly their structure has been overtaken due to the influence of the professional game. They play expansive rugby at great pace but have difficulty sustaining their early intensity and fell away dramatically after half time in every game. There is not much growth going on compared with elsewhere in Asia and their preparation is now outdated. Hopefully they will react positively to the shock of relegation and bounce back next year.

Nor is there much of a gap between Divs 1 and 2. Despite the resources ploughed into China, the size and athleticism of their team and the amount of time the PLA spends training, they were not nearly tough enough at the contact area and both India and Thailand blew them away. The Thais possessed one of the players of the tournament in Warongkorn Khamkoet. Even against the Philippines, the convincing winners of Division 2, whose backline were almost exclusively Aussie rep players from both Union and League, he looked unstoppable. He had electric acceleration, a fine left peg, tackled hard, had good hands and most importantly had a well developed game awareness which invariably allowed him to make the right decision. Full marks to the Thais who selected their team from Passport holders only and for producing a player of this quality.

There are many fine professional players in Japan of course, but the stand out player of the tournament was the Kazakhstan openside Anton (the Horse) Rudoy. His Russian club prevented him from travelling to 2 away games (I’ve heard that one somewhere before) but he seemed to single-handedly win the matches against the Arabian Gulf and Korea. Some of the more powerfully built Asian players are hard to stop, as they have very good footwork, but he did more damage carrying the ball than anyone else in the competition, scoring a hatful of tries in the process, He was a fine fetcher as well and comes with a pedigree as his mother played in the 2nd Row for the Kazak women’s team for 15 years. Quite simply he could play for any club in Europe.

The step down from Division 2 is more pronounced as the teams are less physically fit and have fewer opportunities to hone their skills with match practice. The Iranians were a bit different however and looked as if they could hold their own at the next level up following their promotion from Div 3. They are in good shape physically, defended well and their Stand Off produced a somersault as high as an Olympic gymnast on the Final whistle.

The Div 3 Press Conference contributed 2 of the more bizarre moments on my travels. I arrived to see Byron Kellaher presenting the jerseys to the Indonesian team (where did he come from?) and afterwards I spoke to their Captain, Kirk Arundale. He had learned to play at Guiseley School in West Yorkshire where I was invited by the Headmaster in 1978 to kick-start their rugby programme. What are the chances?

Other highlights included the last ever after match Dinner for the Arabian Gulf team following their fine win against Korea in an exciting contest full of open rugby. They have been split by the IRB into the 7 different countries from which they were formed and it was an emotional occasion. It wasn’t too emotional because I can definitely remember the belly dancer and the referee and touch judges being forced into a beer drinking contest before being presented with ties by the hosts. It would never happen at Murrayfield.

The HSBC A5N has been a great catalyst for the game in Asia. It is important that youngsters being introduced to the sport can see a pathway to the top of the game. In the divisional tournaments if you win 2 games you get promoted, lose 2 and you get relegated. This has brought a focus to the game in a continent where the enormous populations mean that the potential for growth is huge. The cut-throat nature of the competition has forced the countries involved to look closely at themselves, decide where they want to go and consider carefully how they might plan to get there.

If you’re still wondering how Cambodia and Laos got on, rest easy. Laos won a tough match that ebbed and flowed in difficult conditions by 12 -3. At the after match reception in the Paddy Rice Sports Bar in Phnom Penh, I was sucked into the Laos court session and forced to drink copious amounts of tequila for changing their pre match warm up from a walk around the park to something more purposeful. The spirit of rugby is alive and well in Asia. 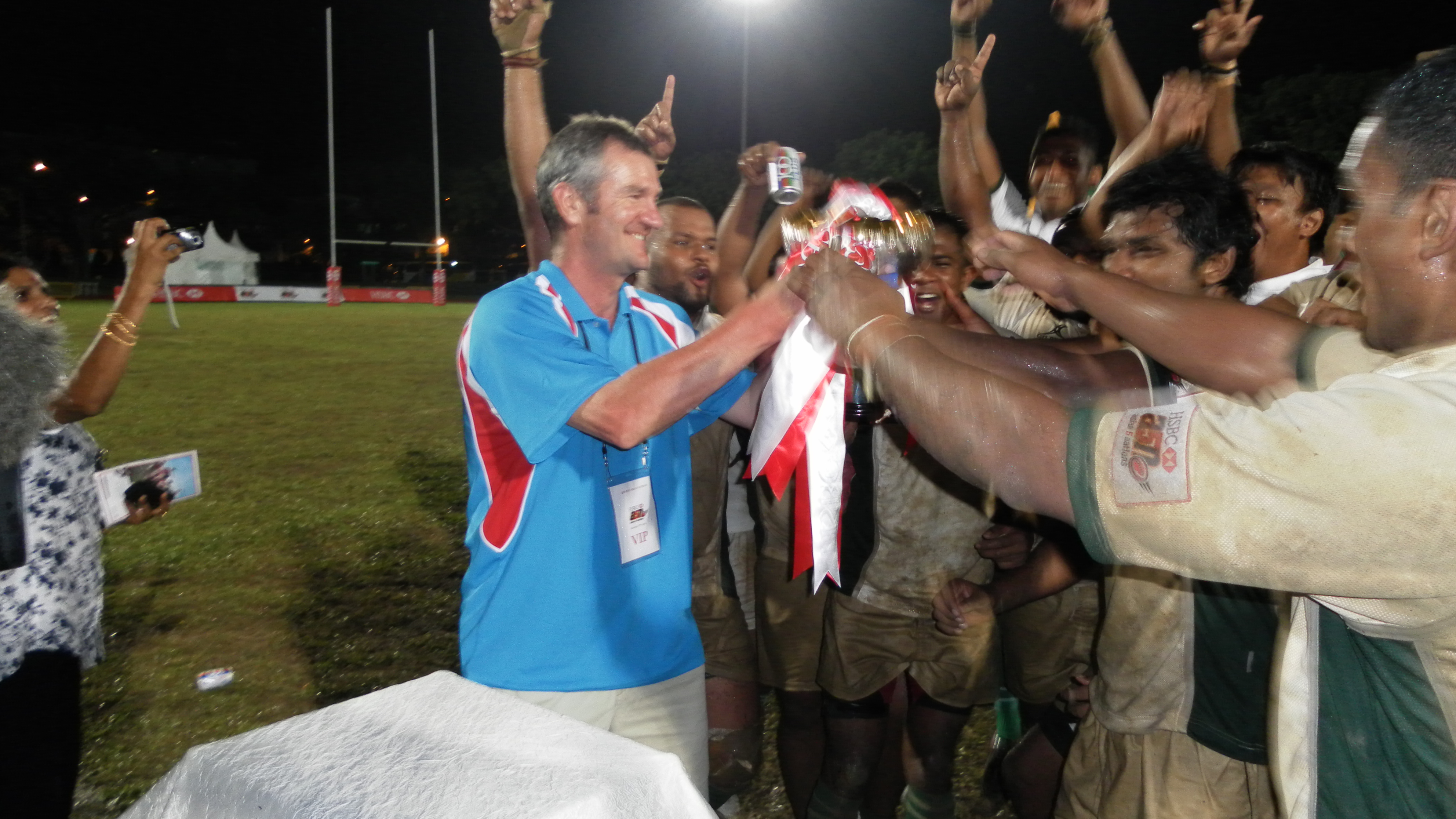 Presenting the Sri Lankans with the Division One trophy in Singapore. This earned them promotion to the Top 5 of the Asia 5 Nations

The Chinese PLA being told to toughen up in Guanzhou 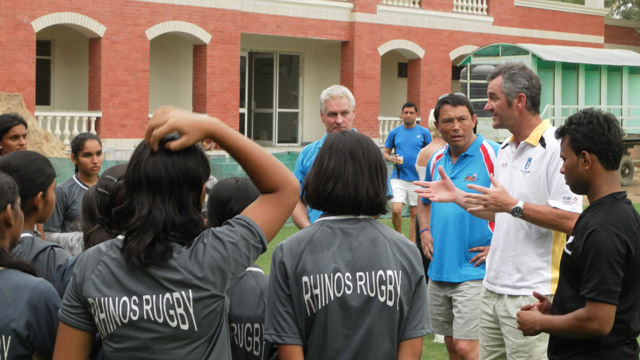 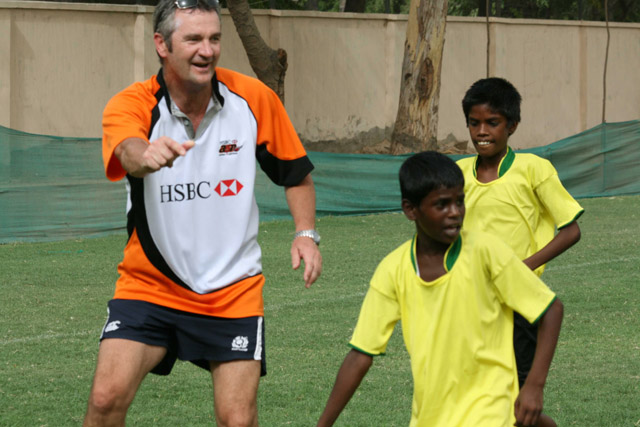 Mumbai Slumdog kids in Delhi during the Division 2 event 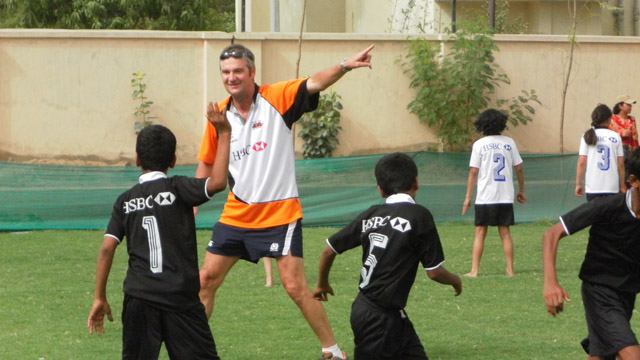