Coach Education in Malaysia for 2010

The Academy ran three Coach Education sessions in 2010: January, July ,and November. Please click on each of the months to jump to that reoprt.

The HSBC Penguin Coaching Academy was asked by our friends at COBRA to run a course in Kuching, Sarawak, on the western side of Borneo. This was the first visit to Sarawak by the Penguins, and the course was run by Simon Jones, Rob Clilverd, and Graham Lindsay. The dates were 25th to 29th January 2010.

Two news articles and a student thank you letter follow.

The following text is supplied by Simon Jones from the IRB Coaching Newsletter number 14 February 2010. Thanks to Simon and the IRB for letting us copy part of their newsletter.

During the past month myself and two other IRB Trainers, Rob Clilverd and Graham Lindsay, went out to Malaysia to deliver the IRB Rugby Ready and Level 1 courses. We delivered to 30 teachers in Kuching in East Malaysia, Borneo as well as teaching some clinics in schools and rugby clubs in Kuala Lumpur.

The whole experience was made hugely enjoyable by the enthusiasm for rugby we found in Malaysia. All the teachers and children we met were so keen to learn that we were kept on our toes throughout the two weeks. I have to thank the HSBC Penguin Coaching Academy and Craig Brown for organising the trip and Col Charlie Wong from the Cobra Rugby Club in Kuala Lumper for being our cheerful liaison man. Charlie is incredible in that at 66 years old he is still playing 15 games a season in the scrum half position!

THE first Cobra-Penguins RFC coaching course here was successfully held with a total of 33 participants from schools throughout the state attending. The course was sponsored by CIMB through its close collaboration with Cobra which has been conducting these courses for the last five years across the waters, starting in 2005.

With the annual inter-school tournament coming up in April and the inter-division in May, the course is certainly timely for the teacher-coaches. When they all go back to their schools, they will be able to introduce a more systematic and comprehensive coaching syllabus rather than just hoping for the best. A few of these teacher-coaches had attended a previous course, organised by Malaysian Rugby Union (MRU) in 2008. The feedback is that the latest course is more relevant because most, if not all, of the participants are new to the game and the comprehensive nature of the course has given them a greater understanding of the rules and laws as well as the technical and tactical aspects of the game. For those who attended the last course, the present one is also useful in that it gives them additional knowledge on proper coaching. The present course involved not just coaching but also application of the rules and laws. There were theoretical and practical modules and the participants were encouraged to ask questions.

Indeed, the participants were put through their paces during the five-day workshop and hopefully, they will have benefited from it and be able to train up good players. The three facilitators from Penguin RFC – Graham Lindsay, Simon Jones and Robert Clilverd – were very impressed with the enthusiasm shown by the participants. According to them, the participants’ grasp of the basics and finer points was very good, and hopefully, they will go back to their schools and do a good job. The facilitators told me it was a pleasure working with the participants and this was probably their most enjoyable trip. They also gave the thumbs up to the facilities provided for the course and the hospitality extended to them during their short stay in Kuching. All the participants passed and received their certificates from Sarawak Education Department Human Administration and Development Sector head Ellen Manium Enggang.

Sarawak Rugby Union (SRU) president Bujang Sapawi, his exco and committee extend their grateful thanks to CIMB, Cobra and Penguins RFC for taking the time to conduct the course. And I hope Cobra Schools Development Programme director Colonel (rtd) Wong Hin Jee and the facilitators from Penguins RFC have enjoyed their stay in Kuching and bring back fond memories. With the inter-school and inter-divisional school tournaments postponed to later in the year, the teacher-coaches will have ample time to bring a new dimension to coaching their charges. And hopefully, this will result in the bar being raised vis-a-vis the technical nous of the school players. This should bring about a knock-on effect of a general rise in playing standards. Furthermore, this will give the other divisions a chance of doing better in tournaments, especially the inter-division.

Presently, only one or two schools in Kuching are having the benefit of teacher-coaches who had either played the game before or gone for coaching courses as evidenced by the dominance of these schools in tournaments over the last few years in the state. Armed with what they had learnt over the last days, the teacher-coaches will be able to put out teams with a better chance of winning. Of course, there are no miracles or overnight success but with the proper basics and experience, these players will soon improve. Come next year, Zulkaranainhisham (Zul), technical chairman of the game for schools, may have a major headache when picking a team – which is good – and I think he will welcome it because presently, most of Kuching divisional and state players come from SMK Agama Sheikh Haji Othman Abdul Wahab and Kolej DPAH Abdillah.

On Tuesday, there was a meeting at Social Development and Urbanisation Ministry for the sports associations specifically on the 13th Malaysia Games (Sukma) in Melaka this June. It was to brief chef de mission Datuk Lee Kim Shin, who is also Assistant Sports Minister, on the preparation and training progress of the various teams and any problems that have cropped up or may crop up.

I was there representing SRU and from what transpired, Lee appears to me to be someone who understands what needs to be done and can be done to help the sports associations in their preparations for the biennial Games. When it was pointed out that rugby is under Category C and would get no financial assistance from Sarawak State Sports Council, and SRU would be hard put financially to send a team to Melaka, Lee said since rugby had shown improvement as evidenced by the state’s achievement in last year’s U-21 national sevens, SRU could write to the ministry for assistance. He added that although Category C sports would not get any financial assistance until they won a Sukma medal, the sports associations concerned could still write to the ministry for assistance in getting special air travel rates from the national airline with regard to exposure trips outside the state. One main point noted during the meeting was that most of the sports associations in categories A and B have had their budgets reduced due to the lack of funds because of the current economic situation.

Lee took the time to listen to the sports associations at the meeting on their preparations, progress and problems, and suggested solutions. He assured that he would try to make the time to go to the ground and see for himself the training by the sports associations. This is something that has been lacking all this while as far as I know. There will be a game for everyone who turns up at the Song Kheng Hai ground today. Kick-off is at 4.30pm. Although the field is still out of sorts, three-quarters of it is being used to play the weekly games until the pebbles and small rocks are removed from the playing surface of the last quarter and rolled. How soon this will be done is still up in the air. Just bring along your boots and shorts as Club will provide the jumpers.

The course is AWESOME!!! I just love it. to be honest, I was so reluctant to go for the course since I dun have any interest at all on da sports of rugby. But to my amaze, I felt confident to coach and is so glad that I attended the course.

Nothing can I say much about the course since it was my first time but I do really hope the course continues in the future by bringing in more and more experienced foreign and local players and coaches to conduct such a course to our players, teachers and coaches here in Malaysia.

The bringing in of Robert, Simon and Graham does indeed lifted up my spirit and as to others too, This is because these guys approaches the game with very positive mind. They see things very differently. These kinds of ideas and attitude does gives a positive impact to my life and I guess to others too.

Whatever it is...please colonel, lets have more and more practical coaching. TQ.

In association with COBRA, a Penguin coaching team returned to Kuala Lumpur to run a week’s long course. The week included the IRB Rugby Ready and Level 1 course plus other selected tutorials targeted at the new coaches.

The course took place at the COBRA club in Selangor from 12th to 16th July. There were 29 Malaysian school teachers on the course as invited by the course organiser Colonel ‘Charlie’ Wong.

The Penguin Coaches considered the candidates to be some of the most enthusiastic and able coaches to have completed the course since the first one in 2005. Throughout the week the student coaches displayed good humour, worked hard and produced some quite imaginative mini coaching sessions.

Evidence of considerable after hours work was apparent based on the theoretical knowledge of the group and the production of some stimulating and imaginative presentations on the last morning.

During the presentation ceremony, we were all delighted to welcome the President of the Malaysian Rugby Union, and a high ranking official of the Ministry of Education. Both witnessed the final presentations by the students and following that the presentation of the certificates.

As ever the hospitality provided by the Cobra Club throughout the week was both generous and friendly.

The aim is to run an IRB level 2 course later in the year. 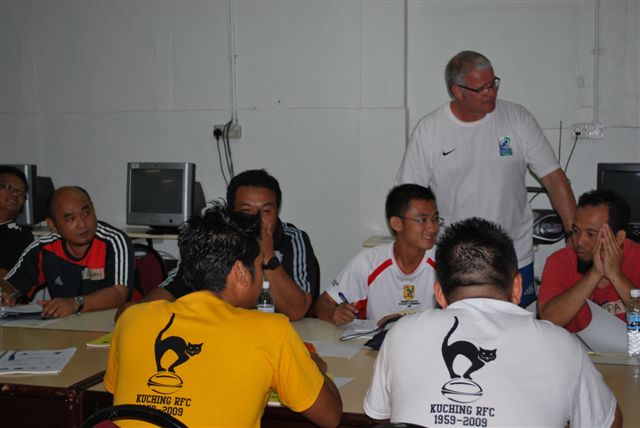 Simon Jones above, in the class room facilitating a session 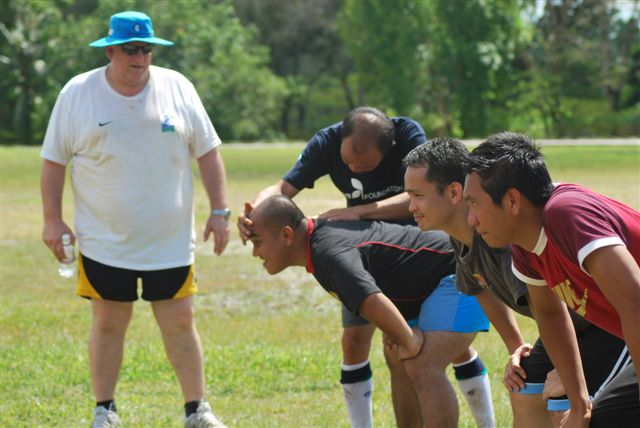 Rob Clilverd watching one of the coaches coach a scrum session 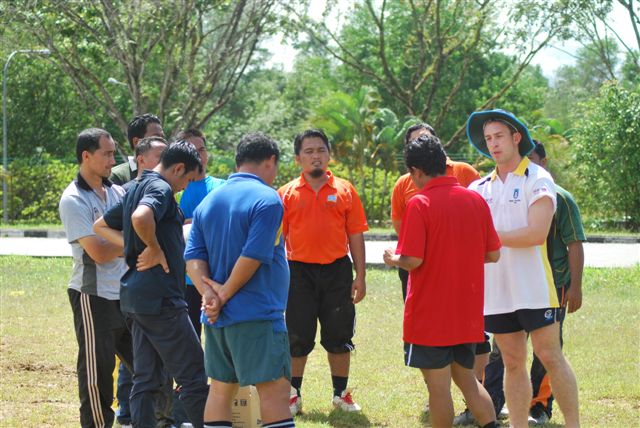 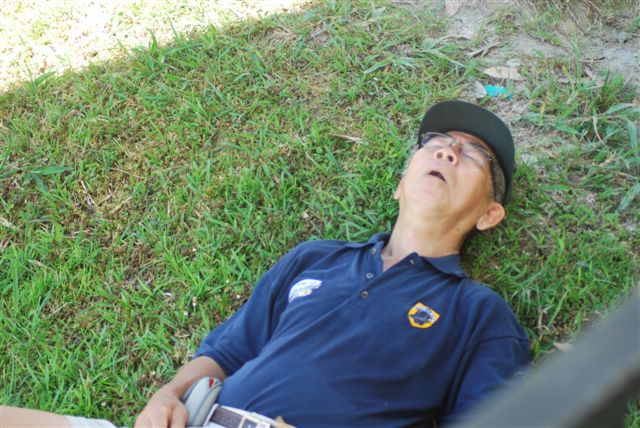 The famous Charlie Wong having a well earned siesta!