For the third year in a row the HSBC Penguin Coaching Academy embarked on Singapore with the added enthusiasm and excitement built from the last two coaching trips and the success of the Penguin 7’s team by winning the SCC 7’s last year. Ben Fisher and Sai Nawavu covered all of the sessions with the help of Deano Herewini when his time allowed around his commitments helping the Penguin’s playing side.

The first session was at the NIE University where 35 keen trainee teachers, fresh off the back of 3 months of learning the game of rugby and how to coach, were given some new games and ideas to help to introduce the game when they move into the schools next year. Lots of variations of touch games and also an introduction to contact and the roles at the breakdown were the main topics.

Rugby fit international was the next session where due to the tropical thunders storms and torrential rain were forced inside. A good bunch of 40 boys, many of whom had played rugby for 3 years were not put off and the session went ahead without delay. Passing, offloading, midfield phase play options were delivered and finished with some gym mats on the floor and exploring a more technical session of roles at the breakdown.

Monfort Secondary school had two visits from the Penguin on this trip and this followed up from the two previous visits over the past two years. Monfort is a targeted local school coached by a keen female teacher Rashidah and also assisted by the SRU development officer Zaki. The 25 boys aged between 14 and 16 were very competent. After some general skills, Sai took the forwards for lineout variations and Ben took the backs for back line attack and re-alignment. The second session was followed up with similar format but the technical focus was tackling and the breakdown which was highlighted as an area to develop by the coaches.

As well as coaching local rugby players we conducted sessions at international schools as well. United World College were in the semi finals of the u18 competition and the hour was spent looking at some attacking structures and some strikes moves. Sai, having plenty of 7’s experience for Fiji, was able to give plenty of ideas and work with the players to fine tune for their big match. The Aussie International School was also coming to their end of their season but still managed to get 45 kids down for some coaching from the Penguins. The kids aged 9 – 13 were treated to an afternoon of passing games, decision making practices and looking at organisation at the ruck.

The biggest session of the week was the SCC festival on the Wednesday where 100 boys from a range of schools were invited down for some fun and coaching in the now muddy training area. What better things to look at in the mud than rucking, offloading and some passing games. The coaching session also attracted a lot of the boys to come back over the weekend and support which was excellent to see.

The Barbarian Center of Excellence was set up to provide additional opportunity for players outside of their school or club sessions and looks to develop the skills of the players and also provide opportunities to tour. 30 players aged from 10 – 14 were in attendance and enjoyed the session which covered passing, catching, running lines and decision making in attack.

The last session of the week was at Centaurs RFC and had the added excitement of two of the Penguin players along to help out (Mat Luamanu and Josh Hohneck). ESPN star sports, HSBC photographer and videographer, as well as local press were in attendance to see what the Penguins were doing and how the young players were enjoying themselves. Following the training of tackling, offloading and breakdown skills the session finished with a try scoring competition in the mud, some group photos and also some interviews for the camera, where the young players got to highlight why they played rugby and what they enjoyed about it.

Thanks to Zaki and all of the local coaches who welcomed us and helped us during our busy week where we covered a total of 9 sessions involving around 500 young players and students.

The local guides / drivers of Hanafi and Zul were eagerly waiting at Johor Baru to take us to our first session in a hot Malaysia. We were joined by Flo Rossigneux, the Penguins Academy coach originally from France, arrived for the second leg of the tour and he was straight into action. The group was now 8 strong with the 3 penguins coaches, Martini Ip from the Hong Kong ladies team, Charlie French from the Hong Kong men’s team, Steve on the video camera and the 2 Malaysian guides. After an hour drive and some fine local food we arrived at Mersing where 53 boys from local secondary schools SMK Sri Mersing and SMK Kebangsaan were waiting. Warm up games followed by passing and re alignment practices were delivered followed by some back line attack and some line outs for the forwards.

The newly formed travelling group settled into the hotel and then sampled some more Malaysian seafood delights before heading to bed ready for an action packed second day.

Another session in Mersing covering the usual passing and warm up games and then followed by tackling and roles at the contact area. The session was finished off with a 3 v 3 scrum where the local players and coaches watched the Penguin coaches demonstrate and coach this technical area of the game. The two schools to attend were SMK Ungku Hussin, Endau and SM Sains Sultan Iskander, Mersing with a total of 64 boys involved.

A further 2 hour drive up the coast took us to Pekan where we were hosted by two boarding schools, SBPI Tun Abdul Razak Pekan and MSRM Tun Abdul Razak, Pekan. The highlight of this session was the NZ Haka that the schools performed with the ‘French’ opposition facing up to them very much in the style of the recent world cup final. The routine of the Fijian, Kiwi and French coaches was very much in full swing now with the 55 players being able to go away having learnt a bit of Maori, Fijian and basic French words as well as some new rugby skills.

Another hour drive followed to Kuantan which would be our base for the next 2 nights. A bit more eating of lovely Malaysian food and a couple of beers seaside was called for before bed. After a morning off to catch up on rest, washing and shopping we went to another boarding school where 65 boys from 3 schools SMK Sultanah Hajjah Kalsom, SMK Sultan HJ Ahmed Shah, Kuantan and SBP Integrasi, Kuantan were present. These schools were quite advanced and we were able to hold a whiteboard session under shade cover next to the pitch looking at attacking shape and structure and also defence strategy. They understood English and French well which helped to get the key points across. The players developed well throughout the session and were using calls and making effective decisions based on what was in front of them by the end of the session.

The afternoon session was with the schools of MSRM Kuantan and SMK Sultan Abu Bakar, which was with a group of 45 beginners to rugby aged 13-14. All of the players had a lot of fun which was the main theme whilst learning the basics of rugby running, passing and tackle technique.

Last stop on the road was Termoloh, where again the players were very new to rugby. The Penguin coaches love introducing the great game to children and SMK Seri Semantan, Termerloh and SMK Kota Gelanggi 2, Jerantut clearly enjoyed their session. 55 boys had a two hour session on running, passing, tackling and an introduction to the breakdown. As always we finished with a game of touch, with a ruck involved and realignment to get some structure into the play.

Friday was the last session of the week for the HSBC Penguins, one that all were looking forward to delivering. Agathian Shelter is local to Cobra Club and has 40 boys living there. 20 of these boys came down to the Cobra fields on Friday afternoon to experience rugby, mostly for the first time. Each went away with a t shirt, badge, hat, some rugby balls and big smiles following their 1 hour session. The session was based around fun games and introduction to rugby. Many of the boys were asking when the next youth session was on at Cobra so they could come and join in which was very pleasing to think that it could be the start of a new interest for some of these young men.

It was another successful trip to Malaysia for the HSBC Penguins covering a wide range of development activities. Introducing rugby for the first time to players, developing the initial work local coaches have done and really progressing with some schools that have been playing rugby for a few years. As well as the coaching, working to help educate teachers and local coaches, and hopefully inspiring young Malaysian rugby players to play the game of rugby.

The children coached over the week have been very easy to coach and have always tried their best to take on ideas delivered by the Penguins coaches. There are some very talented young players in Malaysia and hopefully within the right structures, they will develop into potential international players of the future. We always found the schools very supportive with a strong dedication to the game.

School rugby in Malaysia can develop and become stronger if the local coaches are well supported with education and support with resources. Each school should strive to get training aids of pads and bibs to enable coaches to put together match scenarios within training to challenge and develop the players.

Lastly thanks to Hanafi and Zul for their driving and entertainment, Charlie Wong and the Cobra club for ongoing support and the local teachers and coaches for all their help. 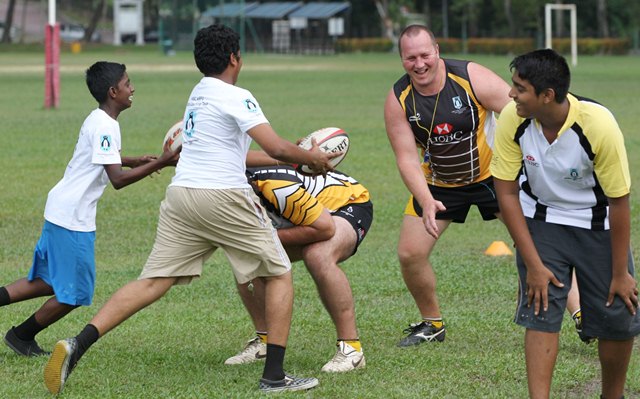 The coaches have fun too! 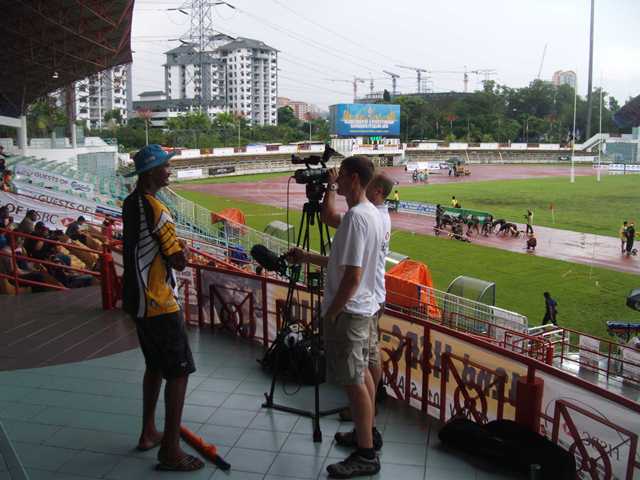 There is no escaping the media for the Famous Fijian! 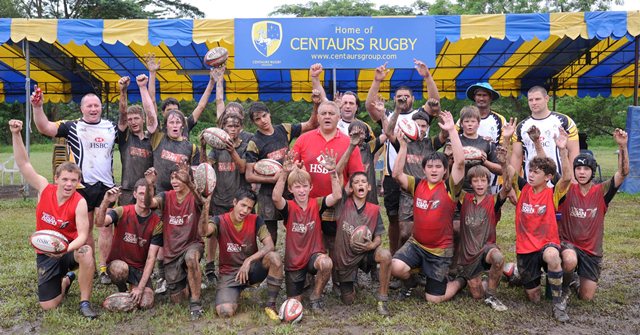 A happy bunch at Centaurs RFC! 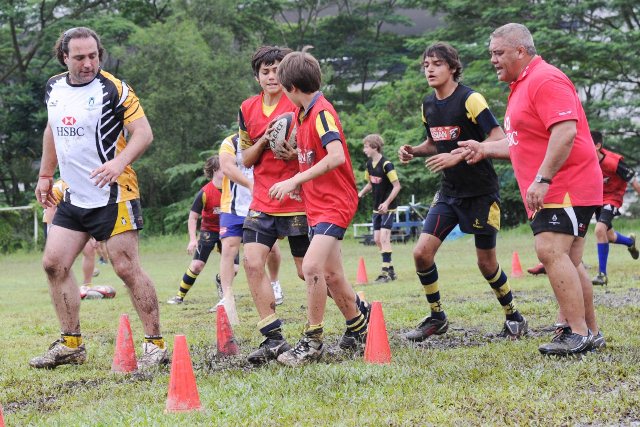 Flo and Deano lead the way. 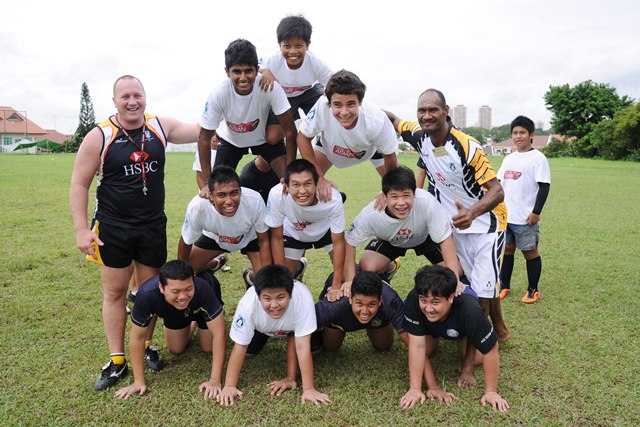 Perhaps this novel approach will solve the problems at the scrum! 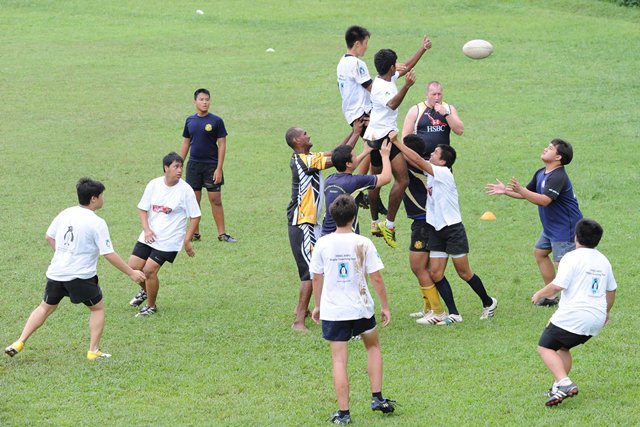 Sai lends a hand at the lineout. 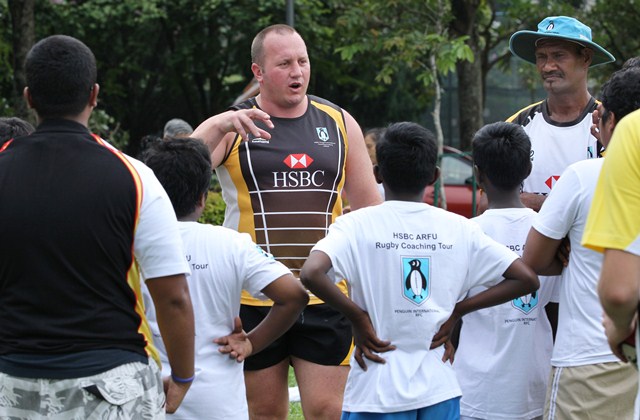 An attentive audience listens to Ben. 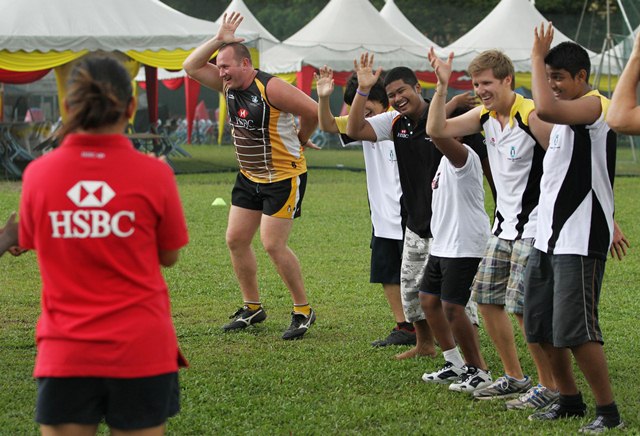 Are you sure this is in the coaching manual Ben? 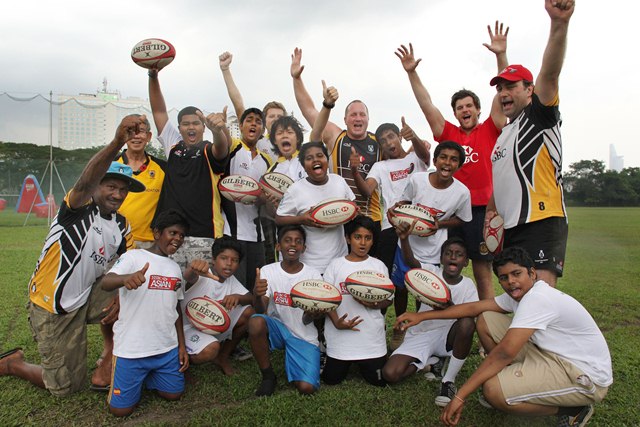 The end of a fun day for all! 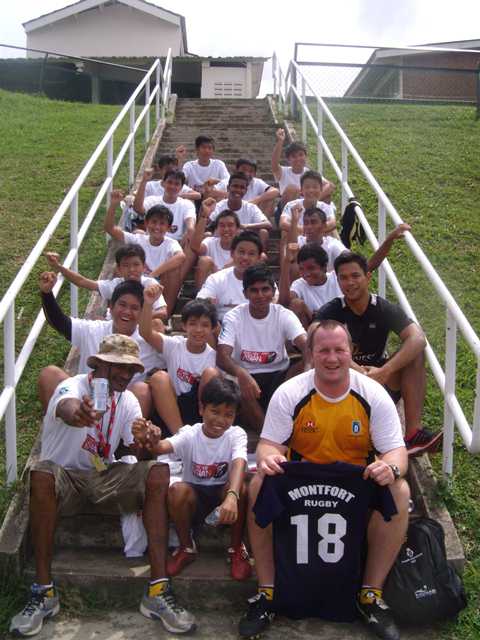