Academy Coaches Grant McKelvey and Duncan Harrison arrived in Hong Kong bright and breezy on Saturday 17th March, navigated their way to the hotel and immediately got to business assisting our partners, Fasttrack, at the HSBC Rugby Festival at Kings Park. Grant and Duncan both set about running a series of skill stations for players and fans alike, looking at the accuracy and speed of passing. Tour manager, Craig Brown, and Penguin Coach, Rod McIntosh, joined the party later in the day to look after the kicking aspect of things. The day drew to a close with the Penguins handing out prizes and giveaways.

The next session was scheduled for Monday morning where Deano joined Duncan and Grant for the first of our rugby sessions with our friends from Rwanda. We were lucky enough to share the excellent pitch at the Hong Kong Football Club with the Penguin squad, which was being put through its paces in preparation for the Hong Kong 10s tournament. The Academy coaches focused on the contact area, tactical understanding, and started the building of a basic structure that our adopted team would look to follow during their competition at the Kowloon 10s. 90mins flew by, and with only one minor injury to report, all was well in the Rwandan Camp.

Next up, an HSBC grassroots session arranged by Fasttrack and attended by HSBC Ambassadors Jason Robinson and George Gregan. The session took place at Good Hope school where 20 girls were put through their paces with excellent help from members of the Hong Kong Womenís team. The session was based around short sided game-like practices, to maximise participation, and all the coaches were very impressed with the enthusiasm, athleticism, and technical ability of the girls taking part. The session finished with a ìfoot raceî between our own Jason ìBilly Whizî Robinson and all challengers.

The day was not yet over for the Academy troops, who hailed a taxi and attend a mass sessions at Sandy Bay. The participants exhibited a wide range of ages and abilities, notwithstanding a touring squad of young players from Russia. Grant took on the task of running the girls' session, which included girls from Hong Kong ages 12 ñ 18, and the Russian National U17 Girls' Squad. Luckily, an interpreter was on hand to help accomplish this challenge. Unfortunately, the same cannot be said for Duncan! With the youngest contingent, including our Russian cousins, he was left to his own devices. All said and done, and once more, we managed to do a great job. Over 100 young players experienced the Penguin way.

Tuesday and session 2 with our Rwandan charges, which focused on their final preperations for the Kowloon Tournament. The task for the Academy coaches was to ensure that the natural strengths of the Rwandan players, their speed, agility and passing skills, were aligned to a more direct approach when required. Session complete, Grant, Duncan, and Deano immediately moved into school coaching mode, and onto a fantastic game-focused session with the pupils from the King George V School. The session concluded with the Rwandan players putting on a tremendous show for the children and teachers, culminating in a traditional song and dance, and involving the whole class and all staff. The children will remember the day the Penguins and Rwandans came to town for a long time!

We didn't think the day could get any better - we were wrong! The Academy coaches moved onto one of the highlights of the tour. Picture the scene: an all-girls school at Holly Family Canossian College; 20 very quiet and shy players; a basketball court; 2 coaches from the Hong Kong Rugby Union; a fantastically supportive head teacher; some crash mats, and 3 Penguin Academy coaches. Two hours later, we had a group of girls giving the coaches a lesson in application and skill acquisition. The session looked at offloading, leg tackling, continuity, and ball retention. A fantastic experience for all concerned, and a most humbling one for the coaches. We left what was a bunch of very shy children waving and cheering enthusiastically. Fantastic!

The Academy Coaches then hightailed it back along to Sandy Bay to meet up with the team who were conducting their annual mass coaching session. Skill stations were set up, and with Browny's mass warm-up completed, the youngsters had the opportunity to work with all the Penguin players in rotation.

Wednesday took us down to the Happy Valley complex with a varied day of sessions. First up was a class of 12 year old children from one of the French Schools in the city. The session was based on lateral passing and the early stages of Tag Rugby, which complimented effectively the work that had already been undertaken by their teacher. The session was welcomed enthusiastically by all, to the point of not wanting it to end and almost missing the bus back to school. This was immediately followed by a session with a highly skilled, British Columbia Elite Youth Sevens Under-18 squad, coached by past Penguin Shane Thomson. Their skills were fantastic, and the players were on the top of their game. With a little tweaking by Grant and Duncan, they were ready for their hit out the day later.

This rounded up the practical coaching sessions for this trip: four extremely busy days, a huge variety of coaching, and the consistent message of the power of rugby. One final appointment, an indoor coach education session with our Rwandan charges. Focusing on the skills required for analysing games and performances, the session took the form of indoor video work and outside practicals. For the latter, we split into groups and analysed the Penguin match against Hong Kong Scottish. A very tired Rwandan squad completed the task very well, and it was obvious to the Academy coaches that the work carried out by the Penguins in Rwanda the year beforfe, was still fresh in the playersí minds. What a good end to a fine and productive trip. Thanks to all the players, coaches, staff, partners, and supporters of Penguin Rugby.

Group photo including the Sandy bay Youth squads, Russian U19 woman, U14 boys and the Russian HK7s squad. 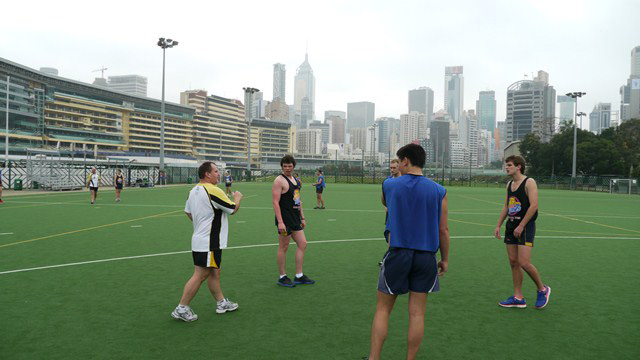 Grant working with our Canadian charges looking at ways to get the big men into the game quicker after line out time. 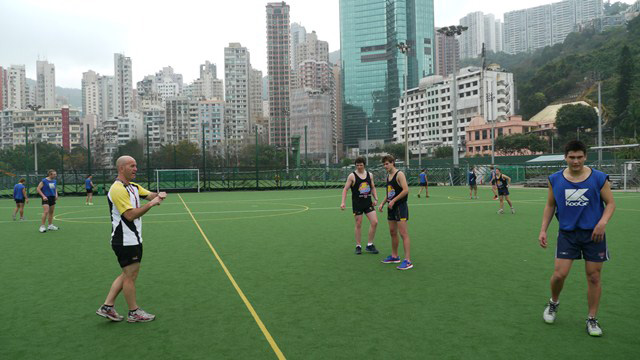 What a backdrop to coach in ñ Duncan has spent worse Wednesdays! Again working with our Canadian Athletes. 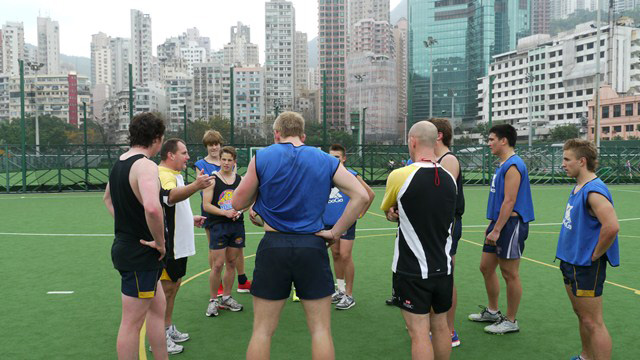 Q&A after the session ñ discussing the options for the guys hit out the next day & Grant wondering how many of these guys are Scottish Qualified!!! ñ a top bunch of guys. 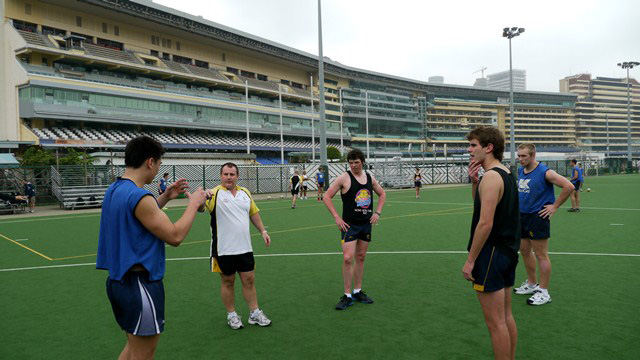 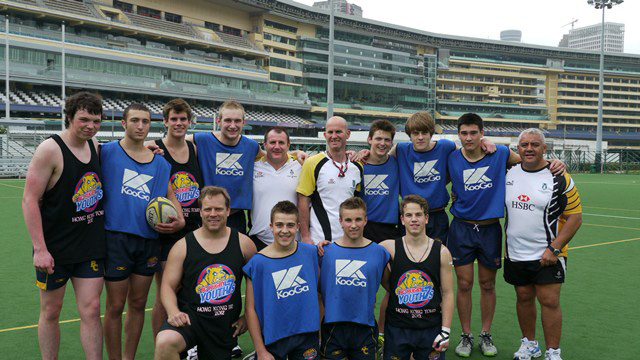 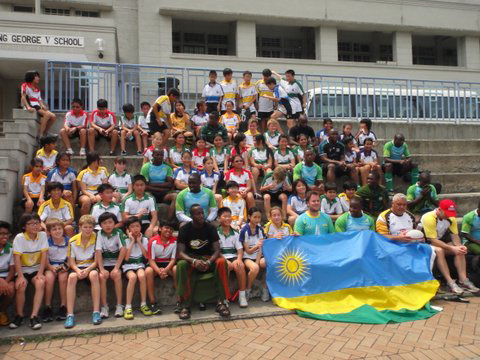 The start of a fantastic day ñ The day the Rwandanís came to town. 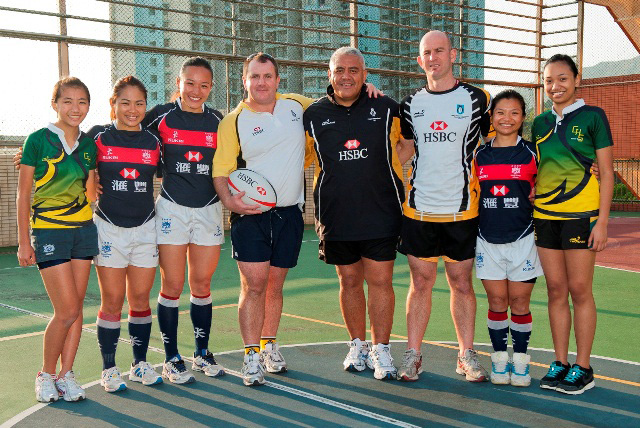 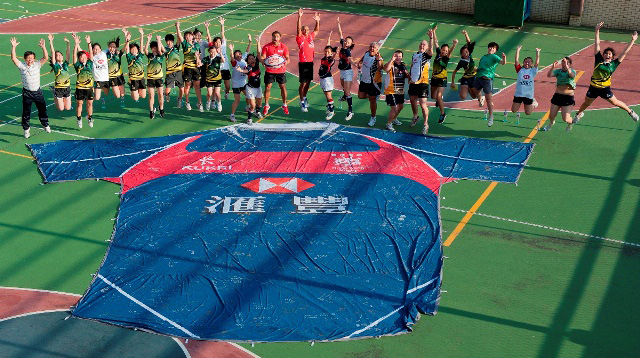