Not quite the fabled Englishman, Irishman, Scotsman and Welshman of 1970’s joke telling folklore, however this year’s South-East Asia Coaching Academy Tour numbered at times two Englishmen, two Australians and of course our own “anything but token” Kiwi in Craig Brown.

The trip kicked off in earnest at the Jagorawi Golf & Country Club, Jakarta with the coaching of the Komodo Dragons, Under 20s National team and Under 20s Women’s Team at various times of the morning which seemed to have come around very quickly since Rob Drinkwater & Tony “Robbo” Robinson arrived in Jakarta on Friday, 25th October. The sessions were well received by the players who loved the game related content of the sessions. It was interesting to see the understanding of context and game requirements become affirmed in the players’ minds, the more they played. There were some really interesting conversations with many of the ex-pat coaches looking forward to the IRB Level 1 course which was to be run at the Jakarta International School the next day.

The school was a wonderful state of the art creation with artificial pitch and facilities to die for – initially poor Steve Barber, our host for the week in Indonesia seemed less than his normal unflappable self when in order to satisfy the course requirements of projector and screen, we needed to change classroom three times in the first hour. This was of no matter once we saw the course cohort coaching. The participants were a wonderful eclectic mix of ex-pat parent, National Under 20 player and National Under 20 Women’s players. We quickly learned that the side was made up mostly of the young ladies from the Mama Sayang orphanage, where we would be coaching on the following Friday. The girls had a great spirit and already were showing some talent for rugby coaching which boded well for the session at the end of our stay in Indonesia where the girls had agreed to assist with the coaching.

The rest of the week was punctuated with sessions at a number of international schools, including a great meeting of minds when Lee came face to face with Jamie Johnson, ex-Harlequin and Borough Road winger, who was now teaching and heading up the rugby at The British International School. After a little head scratching and some navel gazing these “likely lads” worked out that the last time they saw each other was when on tour with Middlesex County in Harare some 20 odd years earlier! What a great time to renew the friendship.

The hospitality of Fred Alloysius was very much to the fore during our stay as was the free flowing food and liquid refreshment on at least two separate occasions at one of Fred’s establishments – The Fez Bar. He clearly is truly a huge supporter of Indonesian rugby and I am glad to say we have the Rugby shirts to confirm this!

The week had many fantastic memories; however in speaking to both Lee and Rob, all three of us felt that the visit to the Mama Sayang orphanage was one which none of us will ever forget.

We had asked Steve and co-host Pete Klestov (Australian Youth Ambassador), how many players we should anticipate and the answer we received was – “not sure guys, but there are 120 at the orphanage”.

Sure enough everyone came out to see what these Penguin coaches were all about! We tried to split the kids into three groups, in honesty, I don’t think anything that was said in Indonesian or English was really going in…..the children were just SO excited.

Once Robbo’s group were underway, I glanced over to notice that Rob had a larger number of players than he ought to and thought I would pop over and try to take some of the children off his hands to ease the issue. NO CHANCE! Every game practice or otherwise that Rob had learnt in his previous lives as an ARU Development Officer, RFU Talent Development Manager or even as a young teacher of Physical Education some years previous, were to be used in the total entertainment of these young children. This was so much so that Rob’s “Horses and Jockeys”, by Rob’s own admission – of no relevance to rugby whatsoever - became a staple for the rest of the trip! BRAVO Rob! Not bad for a National Governing Body General Manager!

As a footnote – I emailed Reverend Mike Hilliard that evening to thank him for sharing his family with us in a most exhilarating stay – according to Mike the kids had fun and were asking when we were going to visit again. BEAUTIFUL!

After a weekend of ‘R & R’ in Singapore to cheer on the HSBC Penguins at the SCC Sevens, (thank you for the hospitality and full deluxe board at the home of Iain and Desiree Macleod – keepers of the biggest pool in Singapore!!); we picked up our final member of the team (Ian “Chook” Fowler) who had been coaching Cottesloe Rugby Club, Perth at the SCC Sevens. Then – “Onward and Upward” to our old friends and the old haunts of Penang. Great to be met at the airport by Colonel Charlie Wong who had a full three day programme for us to follow.

The players we coached all had been well instructed in rugby basics by their school teachers, many of whom had attended the last Penguins Level 1 run in Penang in 2006! It was really gratifying for Charlie to see all of his labours of the School’s Development Programme coming to fruition after this lapse in time – we think he must have been quite proud and rightly so.

The players of Penang had some really good skill sets, enjoyed contact and understood how the game of rugby needed to be played. They were very helpful in translating our English phrases and wanted to learn – Lee commented on how well the players grasped the main objectives of the session and Chook ran a fantastic line-out lifting session for over twenty players, with no hookers to throw in and just one ball! I must say the players were completely mesmerised by his coaching!!

Penang was a whistle stop visit and we are indebted Charlie for making everything possible. Following a very quick turnaround at our final coaching assignment in Penang it was off to the airport for the last leg of the tour and back to the Penguin home in Malaysia - Petaling Jaya and the COBRA club. No time to hang about as it was change into “number ones” and down to meet Craig, John McKittrick and the playing squad for an evening of entertainment at the HSBC Building - Penthouse floor, where we were the honoured guests of our fantastic sponsors and in particular Jon Chivers (Head of Network & Network Support), who certainly knew how to entertain a group of young rugby players from across the globe.

Thursday was a rest day for shopping and general catching up with laundry and admin.Friday was to be our last coaching assignment in Asia – a little sad really, as we split into pairs and coached the provincial squads from Charlie’s National Schools Development Programme. Rob and Chook looked after the boys from Johor whilst Lee and Robbo coached the players from Kuala Terengganu (great as this was the second Level 1 venue we delivered at in 2006). Rugby had clearly been embedded in the schools programme on the East coast.

We finished our sessions with a visit to St John’s school in the centre of KL. Again, well-grounded players with a real love for the game but just looking for a regular coach. Since the departure of dear Hang – Penguin’s liaison officer for more years than Browny would care to mention, they are a talented group in need of someone to guide them. Any volunteers? The Nasi Goreng and fried egg tea went down a treat – many thanks to the St John’s PTA who took time out from arranging the school’s 110th Anniversary to entertain us once again.

As he put so much work into collating the data the last word on our coaching should go to Lee - “According to my calculations we coached 20 schools, 2 schools provincial teams, 1 club team across all ages, Indonesia National 7's team, National 20s women’s & men’s and an orphanage. Total number of players coached was 841, plus the 27 coaches on the IRB level 1 which gives an accurate figure of 868 in terms of numbers coached”.

The trip was a great experience for the coaching team with new friendships forged and old friendships renewed – the warmth of the COBRA club, especially TJ in assisting us to celebrate Lee’s Birthday, on every evening from arrival in Penang and in any new establishment where he hadn’t celebrated it before was most appreciated.

Charlie provided his usual clockwork logistics and we have just heard the great news from Steve Barber that Indonesian Rugby has now been granted full IRB Member status! Thanks to all who helped make this happen. Thanks to all Penguin Academy coaches. Thank you Browny and the HSBC Penguins. Thank you HSBC and thanks very much for rugby – truly a global game! 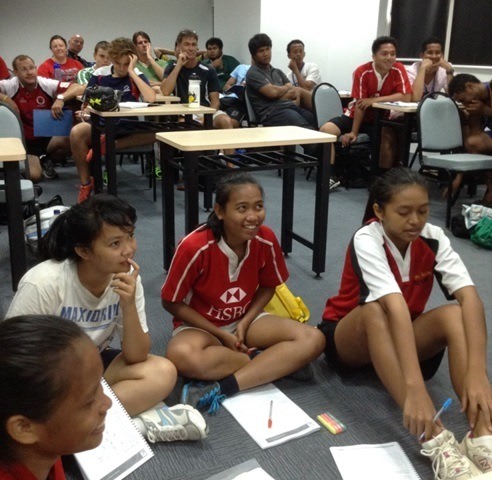 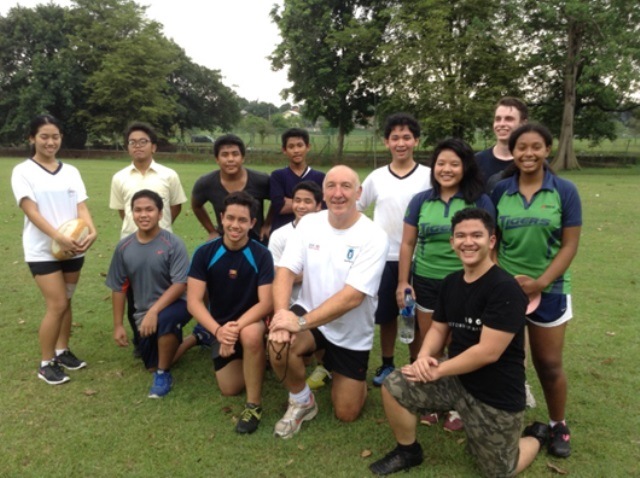 Lee at the British International School 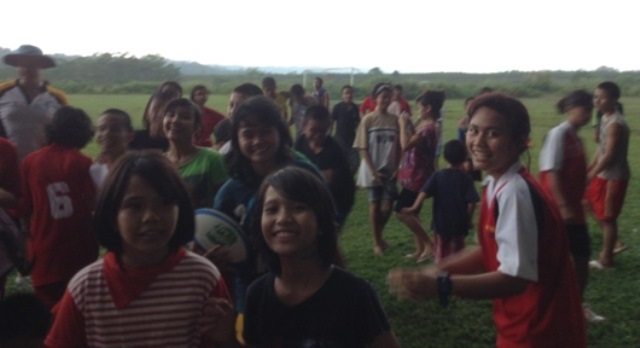 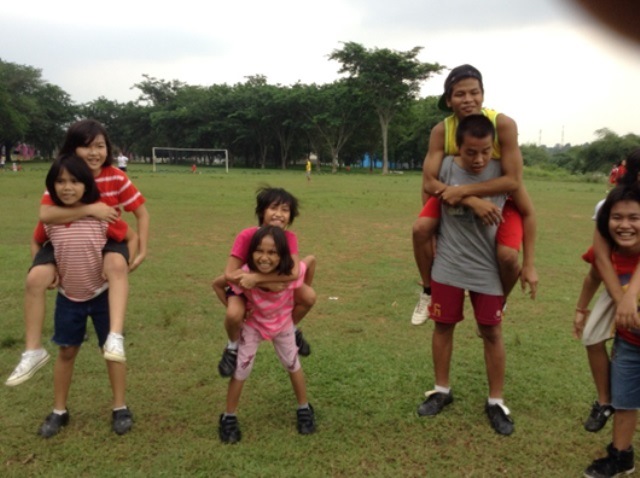 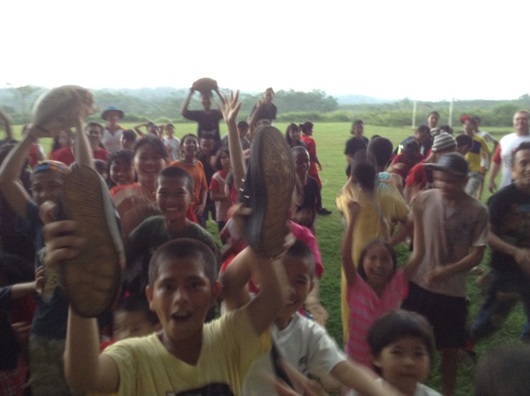 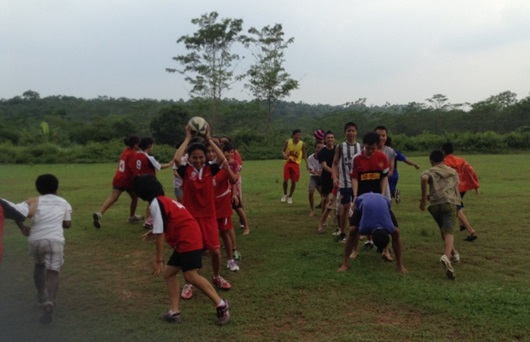 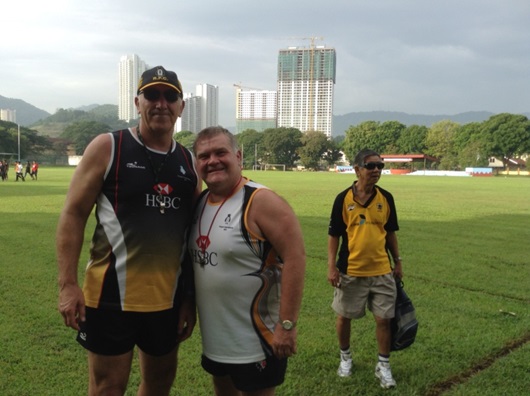 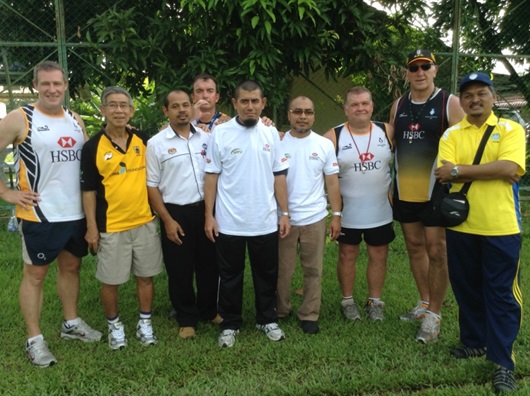 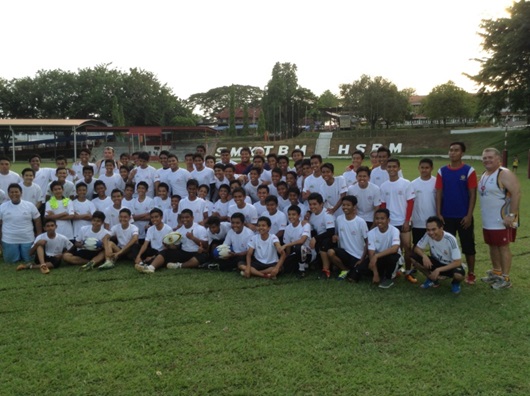 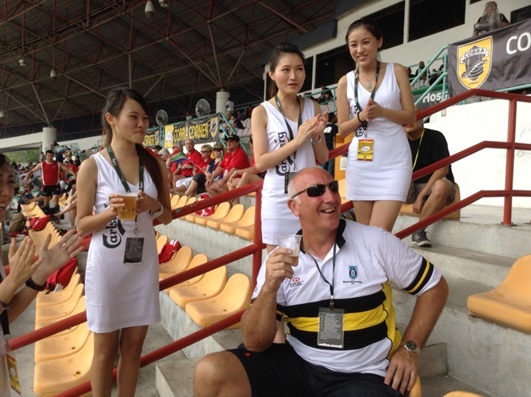 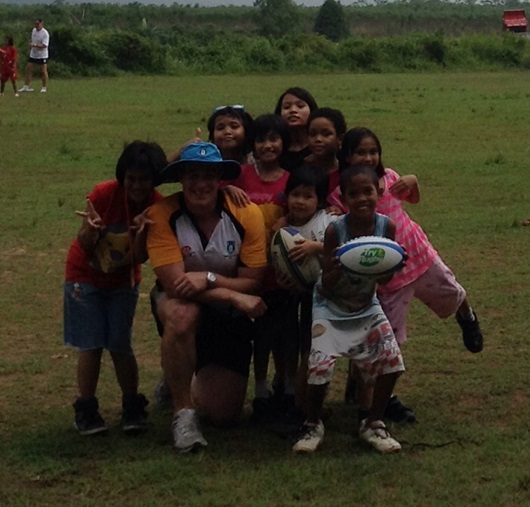 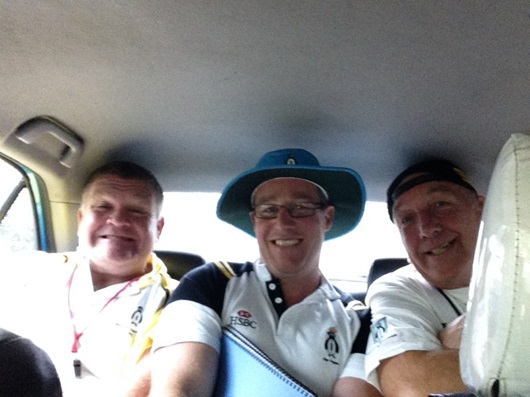 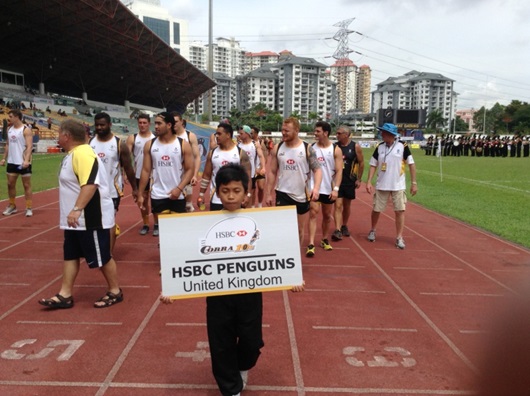 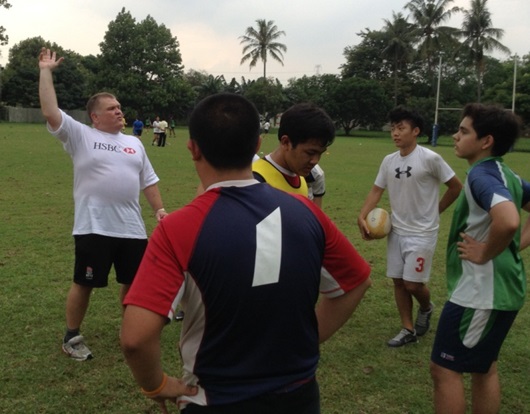 Who wants to be an HSBC Penguin? 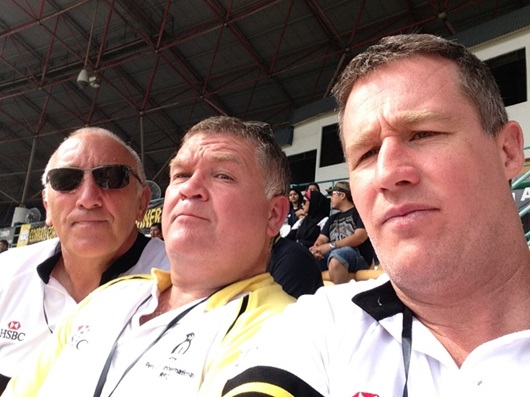 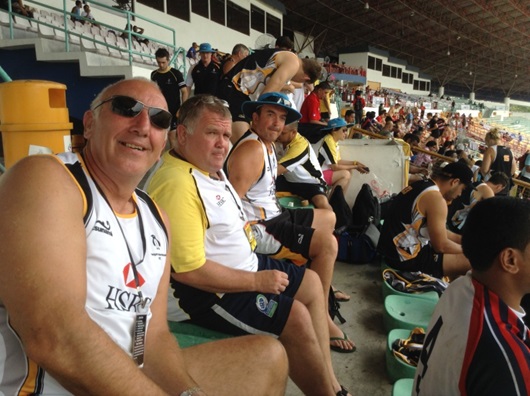 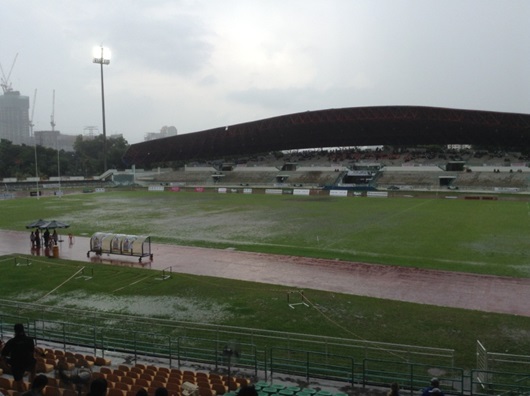 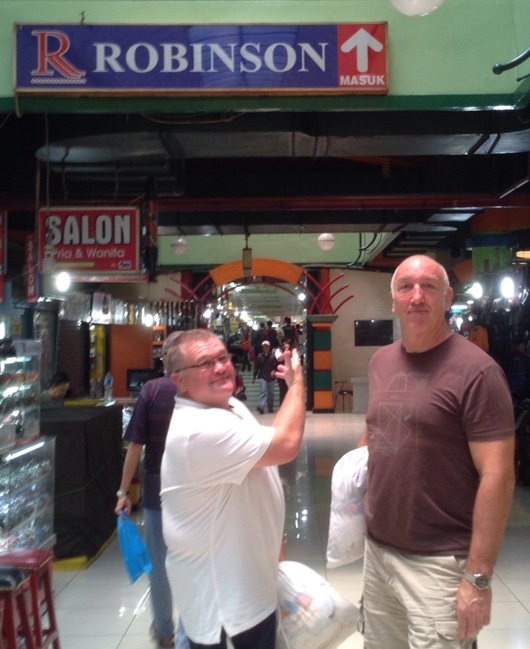 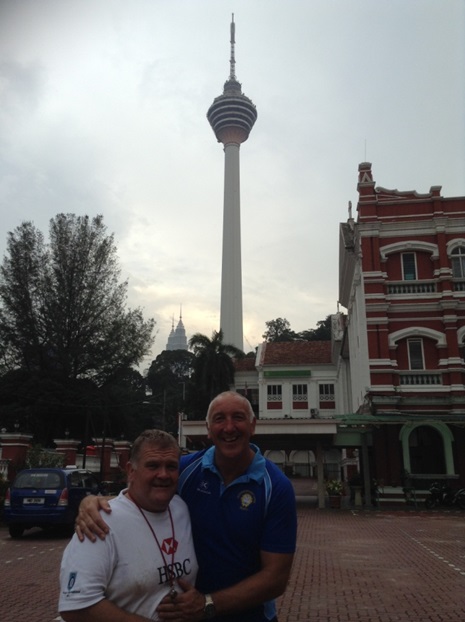 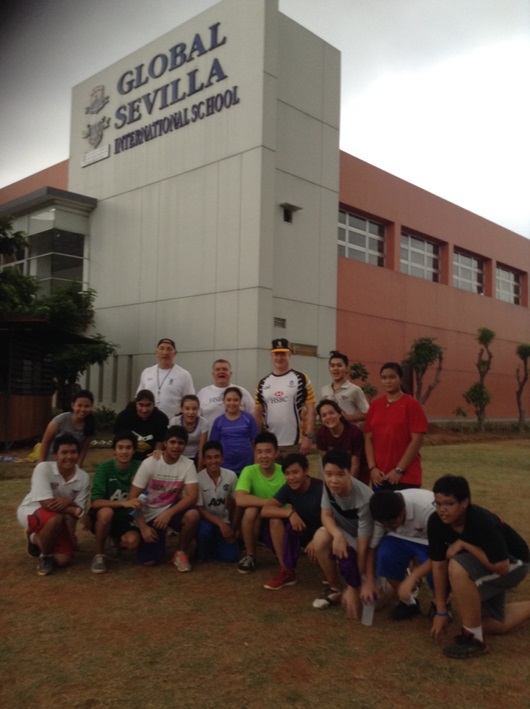 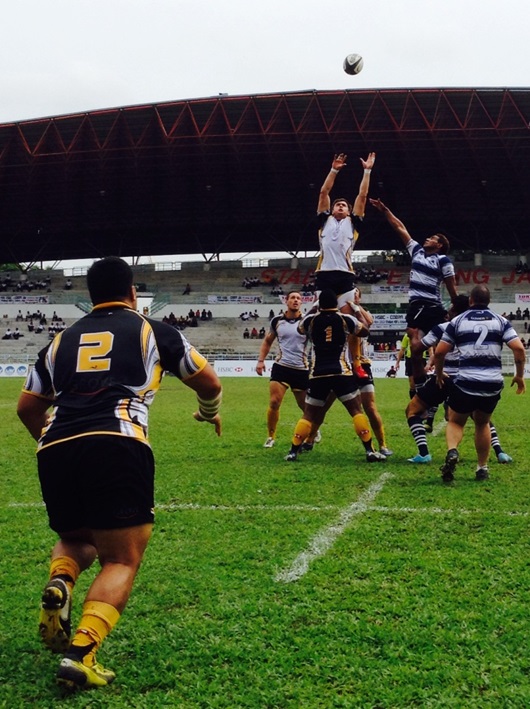 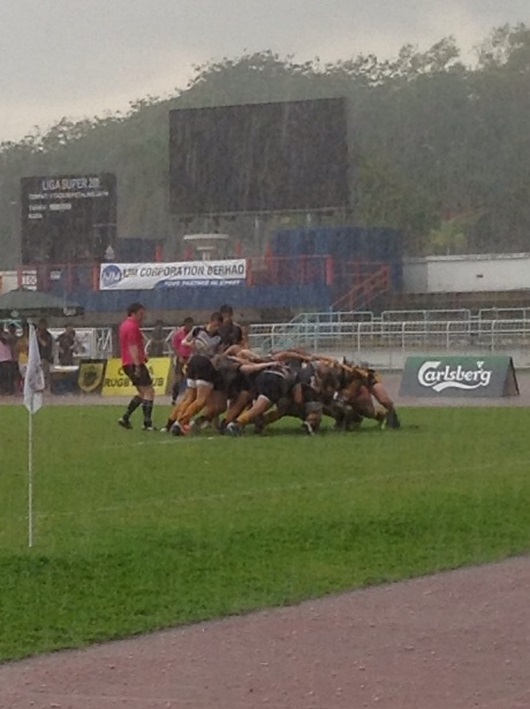 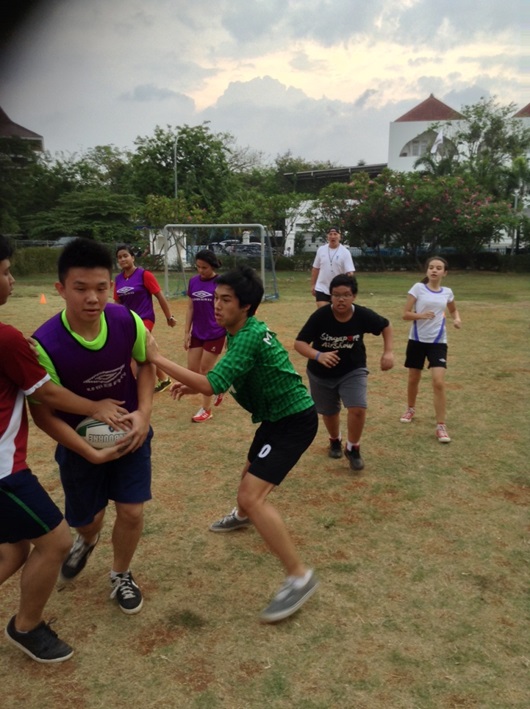