The HSBC Penguin Coaching Academy trip to the Philippines was the second for the Club following the short coaching trip there in 2013.

In the weeks and months leading up to their departures on the 30th July, lots of Skype calls and emails had been exchanged between the coaches, to finalise a full and varied program trying to cram as much development work as possible into the eight day trip. The HSBC Penguin coaches consisted of three experienced Scottish coaches, and an Englishman to make sure everything went smoothly on and off the pitch. They were Dave Cockburn (Cobie), Hugh Campbell, Kevin Brown and Lee Adamson. The common denominator was that they all, at some time in their coaching career, had an involvement with a Scottish representative team. Hugh, notably, had coached the Scotland senior team.

The 30th July travel plan went without a hitch; Lee met Cobie and Kev at Heathrow Terminal 2 and they then met up with Hugh at Manila airport after he flew in from Thailand. After a short cab ride to our hotel we met our man in Manila, Peter Wright, who is the Head of Development with the Philippines Rugby Union and had organised our coaching program, which was to begin the following morning at a rugby club just outside the city.

Day one began with a drive through the city and out to the Alabang Eagles rugby club and was spent working with the players and coaches of the Philippines Development team. The HSBC Penguin coaches looked at set pieces, scrums and line-outs in the morning and developing play from set piece in the afternoon.

The HSBC Penguin coaches also spent time with the local development coaches, who were running a ‘Get into Rugby’ session for the 12-18 age group at the club. This group was made up of youngsters from varied backgrounds being introduced to rugby as a way of informing them on a healthier lifestyle.

The second session on Sunday, was also spent at the Alabang Eagles ground with the HSBC Penguin coaches working with the development squad players and their coaches as part of a detailed coaching programme to assist the teams in their games in the following weeks. The area of focus moved from set piece to patterns of play.

Monday began with a visit to the headquarters of the Philippine Rugby Football Union based at the National Sports and Education Centre. The HSBC Penguin coaches met the union staff and were given a briefing about how they were developing the game in clubs, and increasing participation. To put the task into context, the Philippines are an archipelago of over 7,000 islands. The overall land area is comparable to that of Italy however only about 7% of the islands are larger than one square mile, and only one-third have names. The country has a population of over 100 million with 12 million living in Manila the capital.

The PRFU was formed in 1998, so is relatively young, yet the strides they have made in a few short years are a testimony to the hard work of a few committed rugby enthusiasts. Rugby in the Philippines is run by a handful of employees and lots of volunteers who are battling to establish rugby in clubs across the country. The clubs are working hard to provide opportunities for young people who have little access to sport of any kind whilst 20% of children under five in the Philippines are under weight because of poor access to nutritious food. Coach Adamson was left with the impression that there was lots of work to do and how being fed after playing rugby was a massive incentive for the children to pitch up and play.

The coaches ran two sessions that evening at the National Sports Centre; one with 25 men on contact management and the other with 24 women participating in a Get into Rugby session with an introduction to rugby focusing on catch, pass and run.

On Tuesday 4th the HSBC Penguin coaches travelled to an orphanage about four miles from their hotel which is run by the Catholic Church and is the home for over 1000 children. The coaches worked with children from this orphanage, and another local foundation, that provides care for abandoned and neglected children. The session was split in to two age groups, 8-14 and 15-18. Local volunteer coaches also joined the session and were tutored by the HSBC Penguin coaches. The session was visited by a group from the Philippine’s military academy, who were full of praise for what rugby was bringing to these young people.

The lasting memory that will always stay with the HSBC Penguin coaches, was the way the young people engaged with the activities offered by the coaching team and the happy, carefree way they went about the session.

Wednesday 5th August was the chance to see if the coaching undertaken earlier in the week with the development players from Alabang Eagles would pay off in a match situation. After a coach development meeting in the morning the group headed off to Southern Plains for a game against Sabah Eagles from Borneo in Malaysia. The HSBC Penguin coaches worked with the Alabang Eagle coaches and completed a feedback session with the players and coaches after the game. The game was a closely contested battle that Sabah Eagles won in the last quarter. The conclusion from the players and their coaches was that they had improved from a week earlier and put on a strong performance against the more experienced guests.

The following day began with a journey out of Manila to Clark, the site of a huge former US air force base. The coaches piled into the PRFU mini bus and battled through the traffic for two hours to escape the chaos of Manila. The HSBC Penguin coaches were met by the players, coaches and organisers of Clark Jets RFC who are a club that encourages youngsters to take up rugby and they provide sessions every Saturday.

The club is run by John Bradley and his wife Miranda, ably assisted by a small group of volunteers, who organise an annual rugby 10s festival which raises money to support their rugby activities throughout the year.

John and Miranda organise the sessions, transport the teams around and even provide a home for eight of the players in accommodation they built next to their house. After each session Miranda feeds all the players that turn up with pizza provided by a local sponsor.

Friday 7th August was spent at Subic Bay with a mix of local rugby and relaxation. The HSBC Penguin coaches checked into Trader Rics, a rugby club that doubled as a hotel.

After had a relaxing day walking on the beach and shopping at the local mall the HSBC Penguin coaches held the last session, which was touch rugby, on the beach in front of the hotel. John, the Clark Jets chairman, had sent out an open invite to all the local youngsters. There was a great turnout with about 40 young people aged 8 to 20 years old playing along with some club members.

The general manager of the resort also joined in. What a great way to bring our Philippines’ coaching trip to a close!

The Philippines rugby journey is a relatively new one. In the short time I was here, I made some new rugby friends. The efforts they put in to make rugby happen, and the hurdles they have to overcome really inspired me. The young people we coached showed all of rugby’s values in abundance. This country has so much untapped potential it’s frightening. When you see coaches giving players a pair of boots because they are playing in bare feet, and the priceless reaction from the player, you know you are in a great place where the human spirit and values of rugby are flourishing.

This was the second Penguin trip to the Philippines and hopefully it will not be the last!

During the seven days in the Philippines, the HSBC Penguins coached: 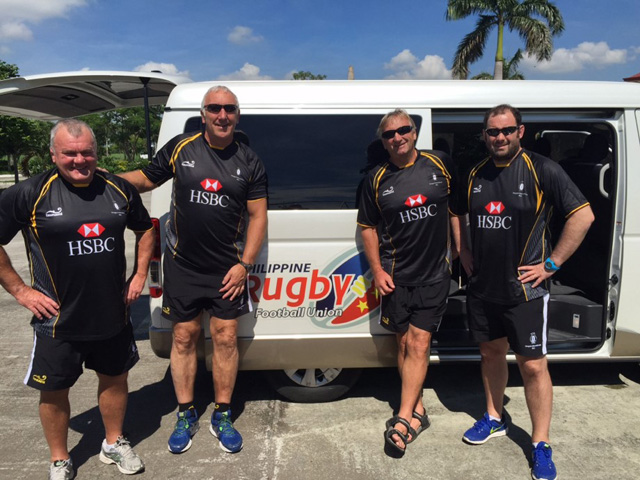 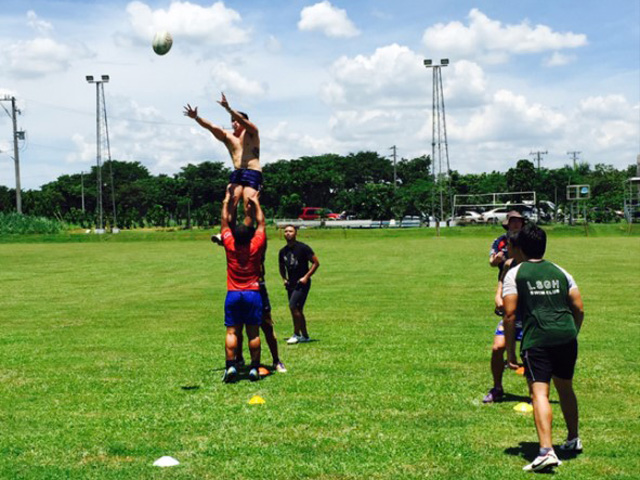 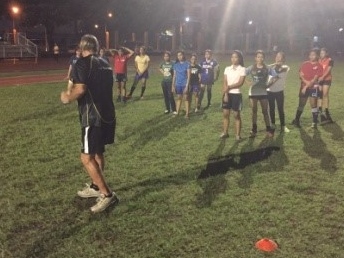 Having fun under the lights of the National Sports complex 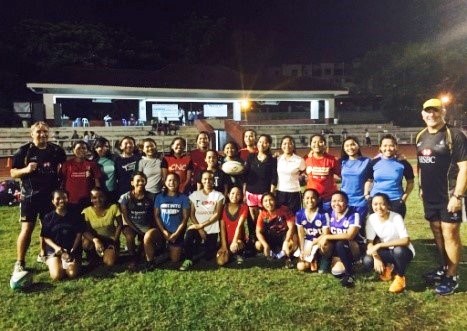 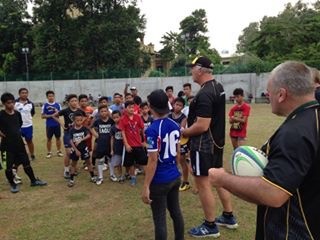 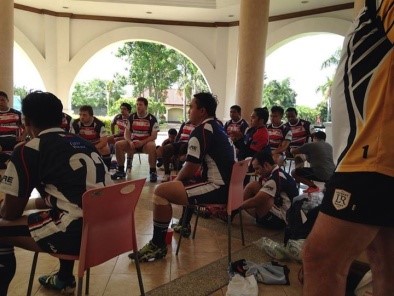 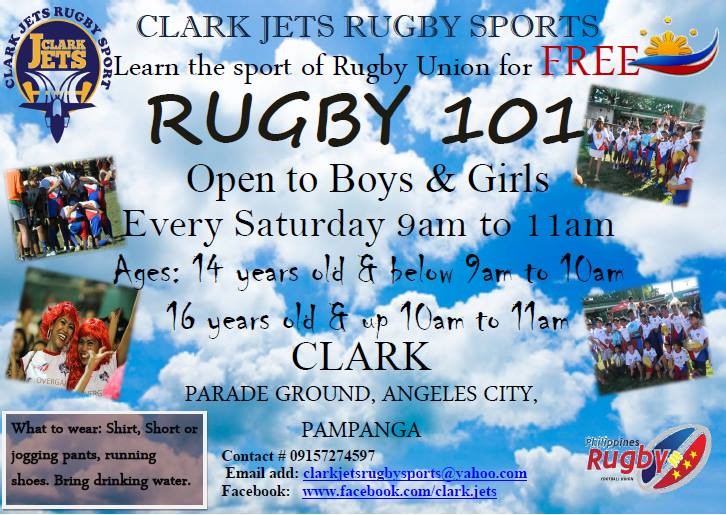 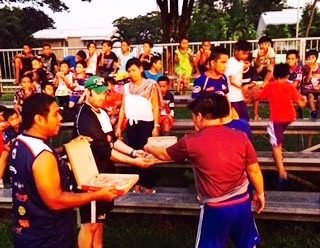 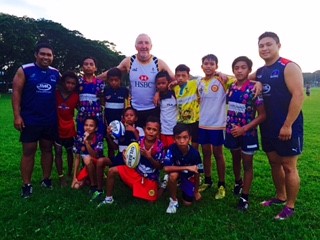 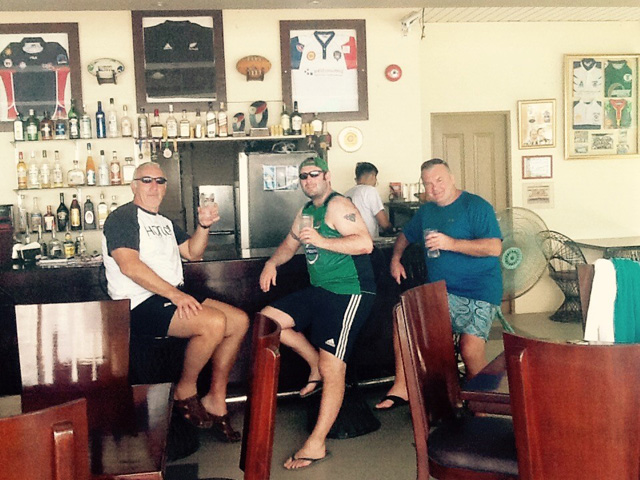 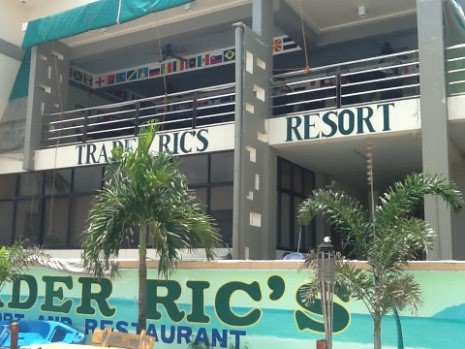 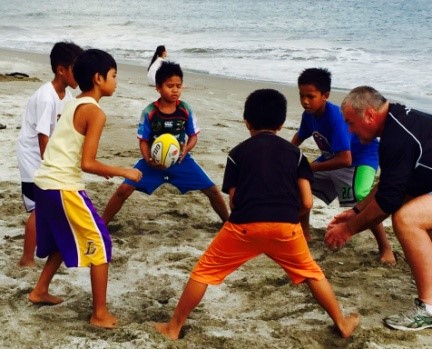 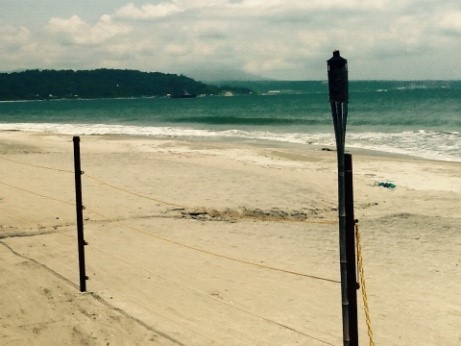 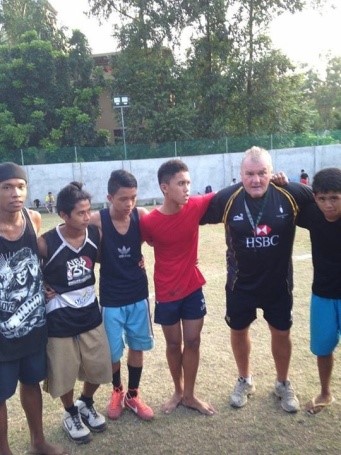 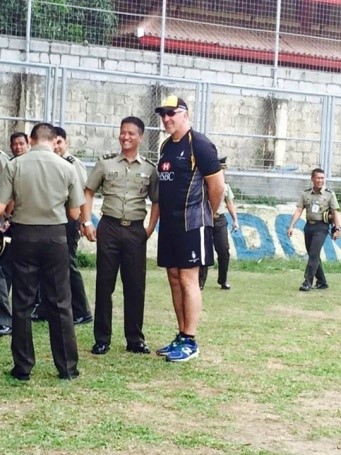