This trip was arranged in conjunction with the Rwandan Rugby Federation (RRF) and World Rugby to assist the further development of the Rwandan Rugby Federation on two different levels. The first was the running of World Rugby Coach and Referee courses and the second to assist the RRF management with developing the game further. All activities took place in Kigali and Ruhango.

As part of the ongoing support to the RRF Tony Penn and Keith Wallace spent four days focussing on management and administration aspects.   This was timely given that a new President, Kamanda Tharcisse (long term friend of the Penguins) was appointed in November and the Charity “Friends of Rwandan Rugby” (FoRR who fund the Rugby Development Officers) have a new Chairman Glyn Watkins, who was also in Rwanda at the time.

Meetings were held with:

Meeting 4 was of key value as we seek a unified approach going forwards, with everyone working together with a common plan.

Joining Tony and Keith on the tour were James Wade and Colin Brett, from the Scottish Rugby Union, who ran the World Rugby Coach and Referee Education courses respectively.

16 Coaches from across Rwanda completed a World Rugby Level 1 in Coaching 15-a-side Rugby at Amorhoro Stadium - the course was a mixture of indoor theory, educator led practical’s and opportunities for the coaches to practice their coaching skills.

The modules which coaches covered included:

The weather was sunny and a balmy 27 degrees so most of course was conducted outside, on the pristine main pitch of the National Stadium. The course took place in unique circumstance, with around 1000 Rwandans sitting a driving theory test in the stands so for the first hour, coaches had to practice delivering using only whispers!

James led a model session, namely on how deliver small sided warm up games that physically prepared players whilst developing the go forward techniques and skills of running, passing and kicking, moving into a continuity game with a skill breakout to bring to demonstrate one way of running a session.

The afternoon saw the coaches working in small groups to deliver their own games and skill breakouts, to demonstrate some of the concepts which they picked up in the morning. The coaches showed great group management and showed creativity in how they designed their sessions.

The final part of the day was an educator led practical on how to safely coach the tackle and the breakdown, doing so on the side of the pitch, which had now been given to an Arsenal sponsored football session!

A great day, with coaches showing they had learned some new concepts to take back into their coaching.

One coach, who joined the course after watching from the stands whilst doing his driving exam, hopefully takes his new-found skills to a local club! 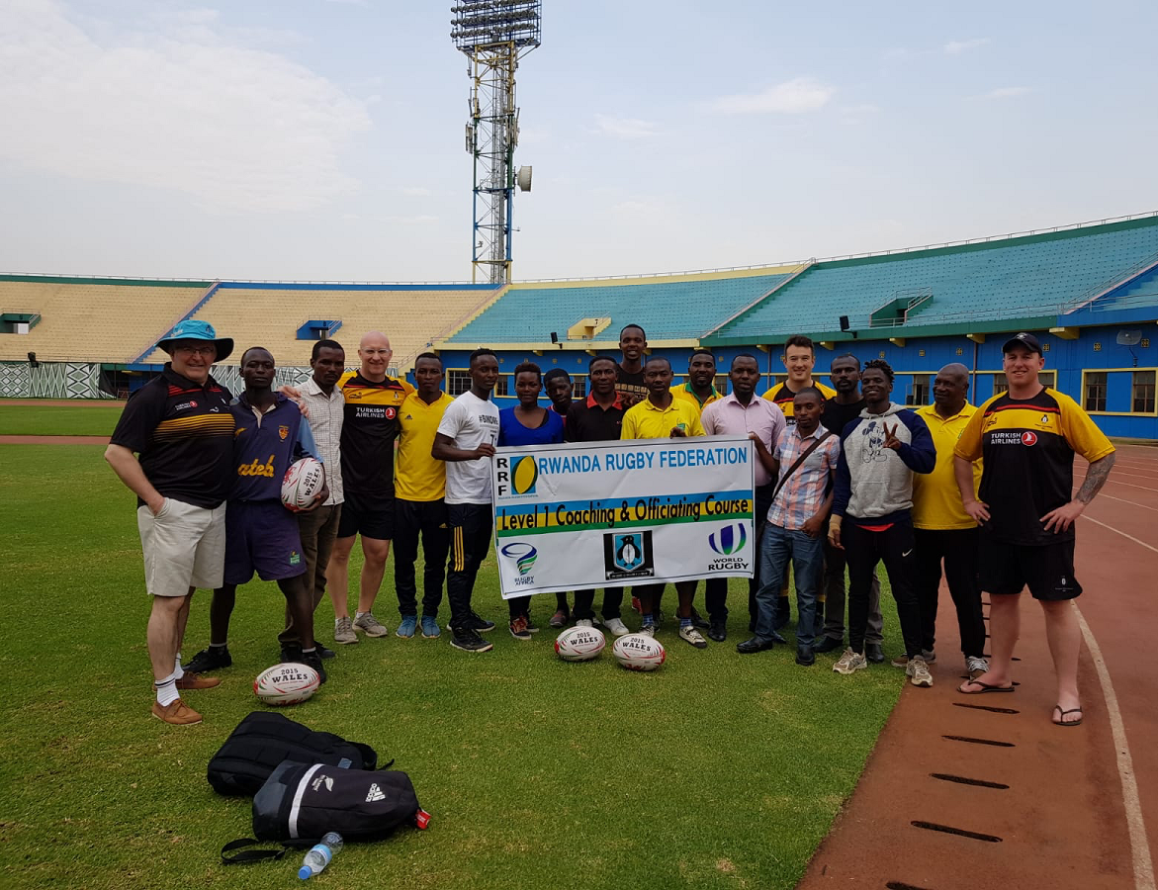 The course began with some great discussion on the principles of refereeing and the game, the role of the referee and the benefits to preventative communication to the player's during the game.

It wasn't long before we were outside playing some games and giving the referees opportunities to develop key skills, such as the laws of tackle, ruck, maul and set piece that will allow them to manage games.

Rugby as a sport can be so powerful and has the ability to draw curious people toward the game.  While we were out on the paddock, a local named James, who is deaf, turns up and joins in with the rest of the guys to play some rugby.  Not a bad experience for his first encounter of the game, in the national stadium!

A great day developing future Rwandan referees who now have the fundamentals of refereeing and will contribute to the growth of the game. 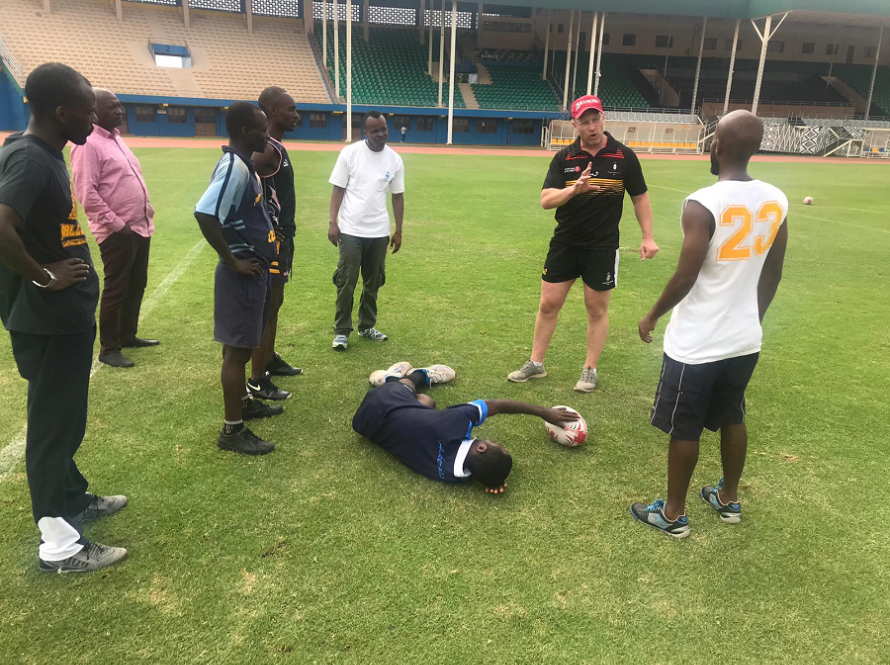 After a day focussing on refereeing, James and Colin went to the Lion de Fer Rugby Club based at Mumena Stadium in the Mumena district of Kigali to take a training session. The session focussed on developing the fitness of the players – so using small sided games with small intense periods of play, the players were put through their paces for 45 minutes.

The novel aspect of this session was that it took place immediately after a Rwandan Premier League Football match had finished, with the Kiyovu FC players still celebrating on the pitch as the Lion de Fer Rugby players were warming up.

The final day in Rwanda took us out to Ruhango in the south west of Rwanda, about 2 hours outside of Kigali. The purpose was to visit Joseph, a Rugby Development Officer who attended the World Rugby Level 2 in Coaching which we delivered in November 2018. This was a chance to see him coach in both a primary and secondary school settings. The sessions being delivered were fun, purposeful and engaged all participants – James was on hand to provide feedback and pointers and help deliver parts of the secondary school session – looking at creating options in attack.

The coaches were once again made to feel very welcome, and we continue to see the progress made which is extremely satisfying. 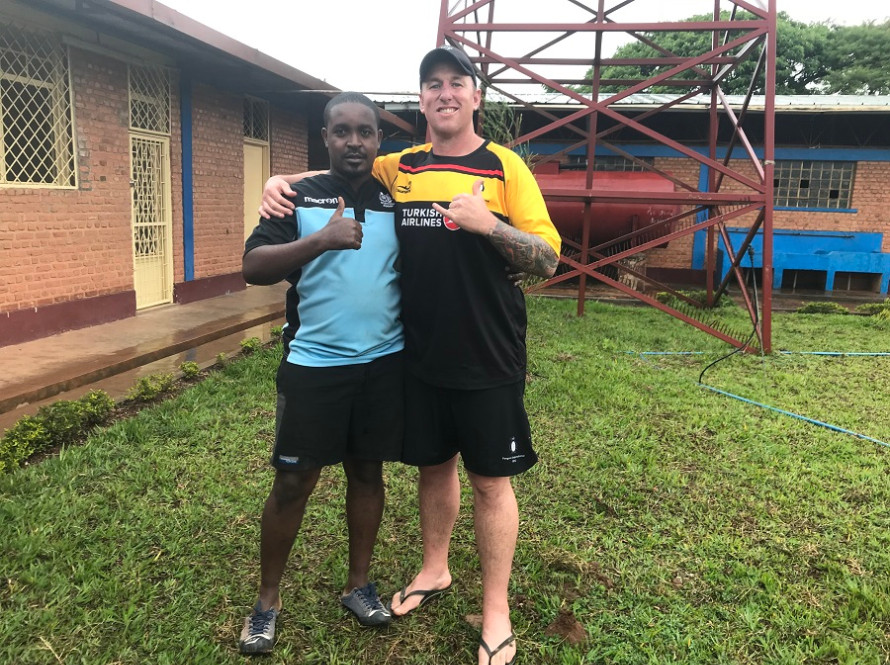 Tony Penn and Livingstone who is the CEO of Rwanda Rugby. This position is funded by the very generous support of the Penguins 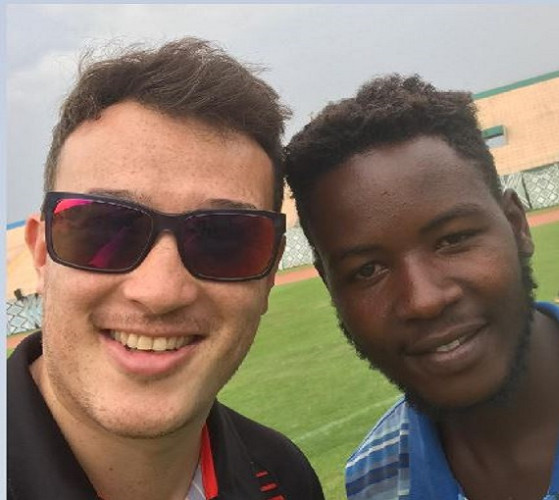 James Wade and a  young deaf participant who happened to be doing his driving exam at the stadium the same time the course was being run, and he came down and asked if he could join in on the course and activities 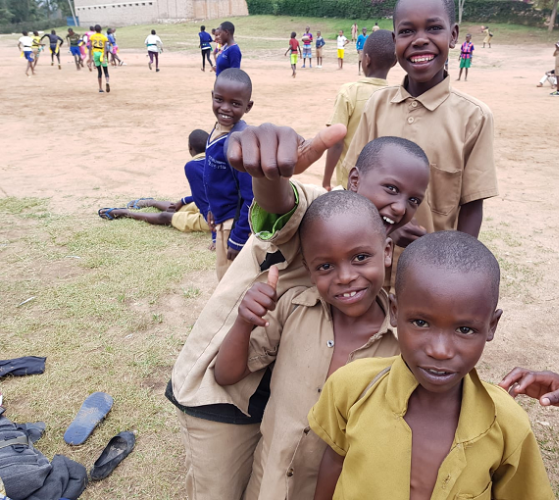 Some kids that took part in a session that Keith Wallace , Colin Brett , James Wade and Tony Penn ran in a small village just outside of Kigali 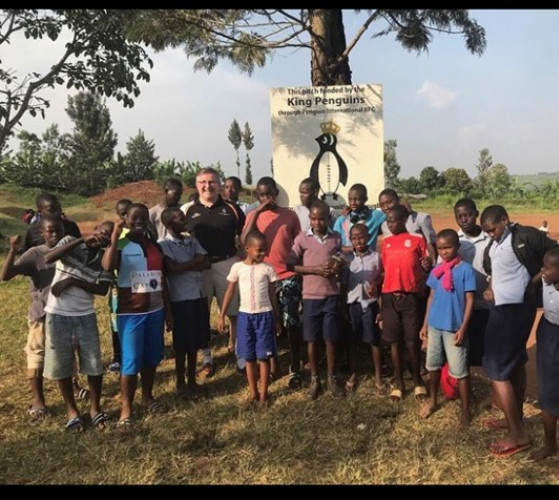 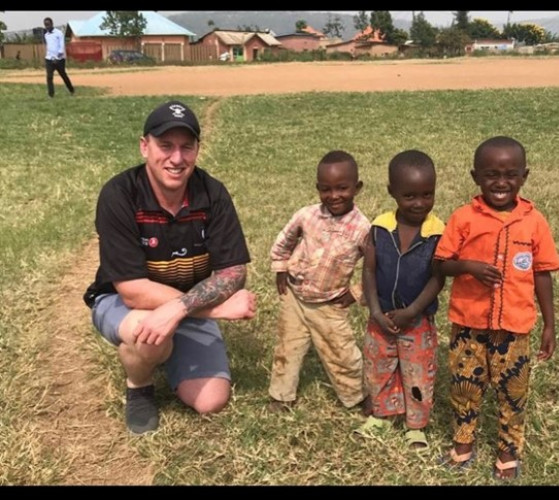